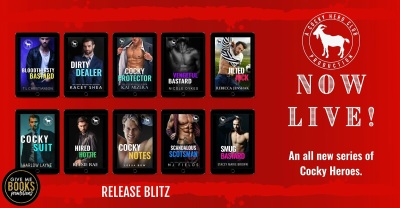 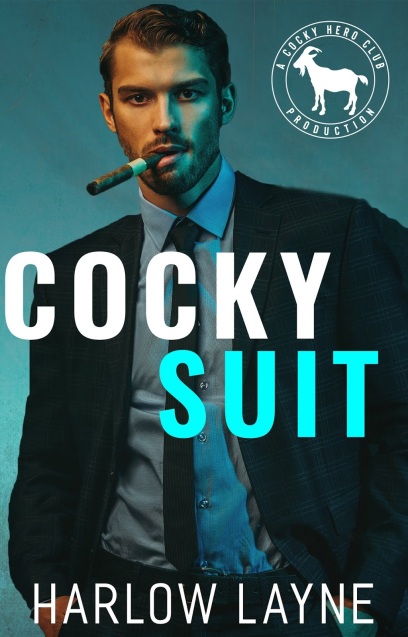 COCKY SUIT
BY HARLOW LAYNE
Sexy. Demanding. Cocky.
All words I would use to describe Kingston Avery.
The owner of Avery Capital Holdings— and my new boss.
It was tempting enough working together everyday, but ignoring his wicked
promises under his roof was impossible.
But the company had a zero fraternization policy, and things were already
complicated enough.
I needed to focus on doing my job.
And avoid doing my boss.
Kingston wasn’t just another suit…
He was a cocky suit.
And when the suit came off,
He was a man who could steal my heart.
Gorgeous. Attentive. Compassionate.
I just hope it didn’t cost me my career. 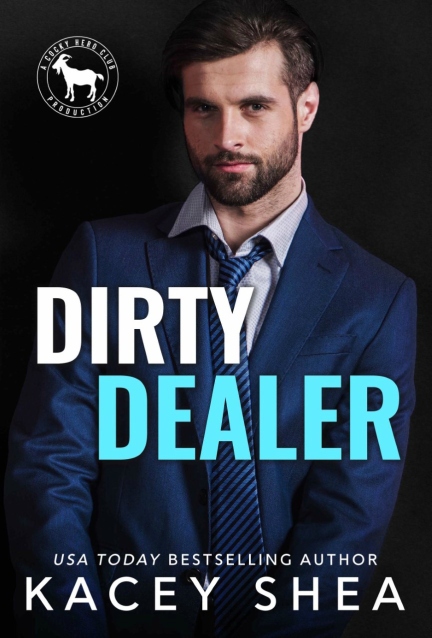 DIRTY DEALER
BY KACEY SHEA
On paper I
have it all. Wealth, security, and a collection of vehicles that spark envy,
even amongst LA’s rich and famous. Money is all I ever wanted, but now that I
have it in spades, I’m restless.
For the
first time in my life, I want things cash can’t procure. I want a real
relationship. Beauty and brains. A salacious little minx who isn’t afraid to
call me out. My equal, in and out of the bedroom.
The problem
is I have no clue where to find a woman like that.
Imagine my
luck when I come upon a curvy, gorgeous maiden in distress, stranded on the
side of I-10 like a mirage fashioned from my deepest desires. It’s fate.
Kismet.
Only she
isn’t impressed. Not by my money, my power, or my ability to make all her
dreams come true. Hell, she won’t even accept my ride without an
argument. But I’m not giving up. She doesn’t know who she’s dealing with, and
I’m not afraid to play dirty. 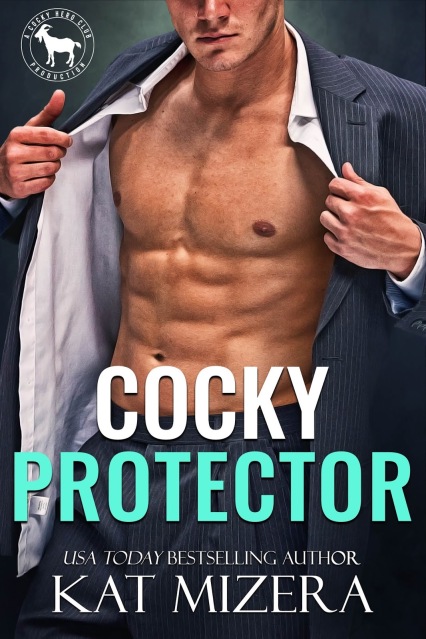 Life as a
CIA operative might be exciting, but living under the radar gets lonely.
Meeting
someone, much less having a relationship, is the most impossible mission of
all.There was someone… once. But she was looking for a white picket fence and I
was headed for war.
Now, my
years of service to my country are catching up with me and I’m ready for a
change.
I just
never expected that change to be Shannon, or that she would be in trouble.
The man in
me can’t forget that damn kiss. The Marine in me is ready to protect her at all
costs.
She might
not want my help, but I’m not walking away this time.
Even if it
won’t have the ending either of us were looking for… 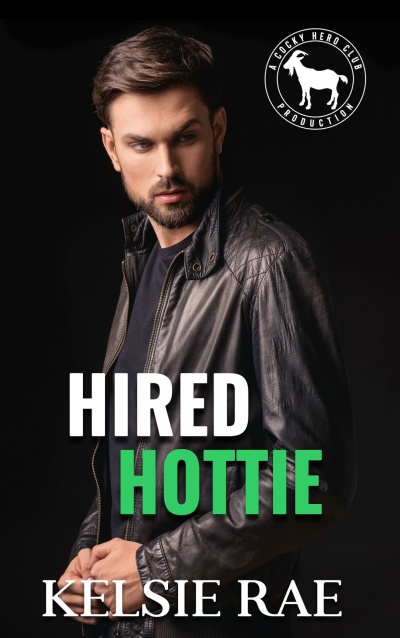 HIRED HOTTIE
BY KELSIE RAE
Levi McCoy took me under his wing when we were kids. He was my protector. My best friend.
My everything.
And I was his sidekick.
When he landed an internship at Montague Enterprises, I was thrilled. Hundreds of
people had applied, and Levi and his roommate had made the cut. There was just
one problem. Only one of them would be offered the permanent position.
That’s when things got messy.
The two bargained for the final job offer, using me as their pawn.
And I fell for it.
The scheming. The stolen kisses. The late night texts. My heart was
being torn in two, and neither one of them cared. I was nothing but a pretty
face to one of them, and an easy target for the other.
All good things must come to an end, right?
Except our ending was one I didn’t see coming.
Hell, it should’ve never started in the first place. 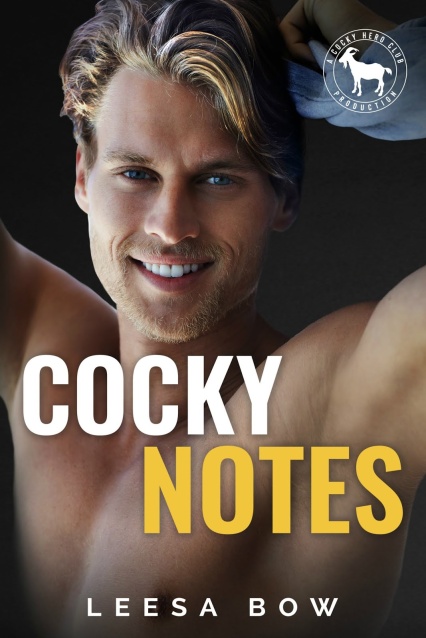 COCKY NOTES
BY LEESA BOW
Who thought writing ‘LOSERS’ on a menu could lead to an affair of love notes?
It didn’t start out as love. How could it when I vowed never to fall in love…
Reef Burton, the sexy blue-eyed football player, and his mates are definitely not
‘Losers’ yet writing it on a menu gave me reason to smile. Only it didn’t make
it to the trash.
He returns to the restaurant where I work wearing his killer smile. I wasn’t to know those squiggly lines and arrows meant something. An offensive play his football team
learned at an earlier training session. Coming here discussing the team plays
over coffee helps… so he says.
He’ll see what I wrote. Apart from it being awkward the next time I serve him he could
also report me to my boss.
I can’t lose my job when in hindsight I need two to pay all the bills rolling in, and
to care for my invalid father.
I’m thankful he kept it as our secret.
Until he left me a note.
Responding will only lead to more trouble.
So when Mr Blue Eyes-Blond Surfy-Hair gives me one of his spine tingling looks, how can I resist? 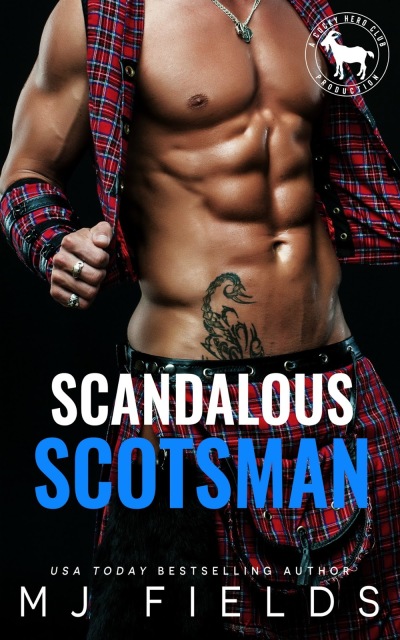 One trip down the stairs, caused by a lone Lego, while wrapped in a towel, spewing a
plethora of profanities, and my cell phone went flying.
I landed on my ass, and then the ER.
Between those two occurrences was a FaceTime call, placed by a bouncing phone, to the number of a man I didn’t even truly look at, who had now seen more of my body than anyone had since my Tinder days, over a year ago.
Three declined calls later, I limped out the door to get myself to the ER before
starting my hectic day.
The ER was packed, but when I saw Nurse Bridget, one of my students’ mothers, I pleaded my case, and she hurried me into an examination room.
An hour later, I left on crutches with a bruised ass, a fractured ankle, and an appointment to see an orthopedic surgeon at four p.m.
Arriving fifteen minutes late for that appointment, I heard the sexy yet very brash
accent of a man who clearly had an obsession with punctuality and had, apparently, no bedside manner.
Dr. Ethan Stewart, tall, copper-haired, sinfully sexy … was a total ass.
After a tongue-lashing about how irresponsible I was to, first, leave the ER with such
an injury, and second, be late, I put him in his place … or so I thought.
Turned off by his arrogant attitude, turned on by the roguish glint in his green eyes and the way he spoke, I left his office a hot … and wet mess.
Upon exiting, my phone rang again. It was the same number from before, and I couldn’t help answering to give the caller a piece of my mind.
Once in my car, I hung up, tossed my phone on the passenger seat, and then looked out the window to see him with his phone to his ear and a grin spread across his
far too handsome face.
It couldn’t be …
Could it? 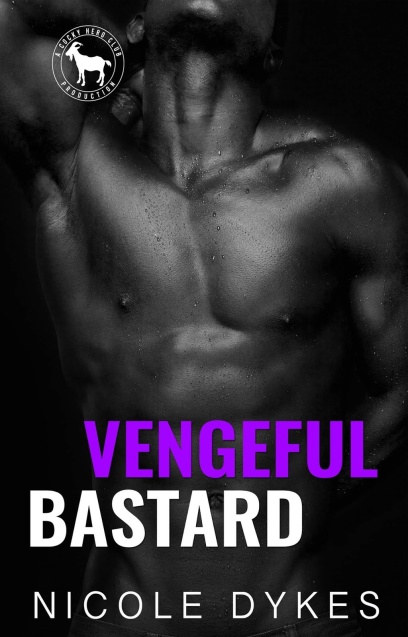 Sean is a normal guy. Has a great job as a photographer. Drives a new car, but not overly flashy. Has his small group of friends.

Yeah he’s just your run of the mill average Joe.

Except, is anyone really all that normal?

The secrets Sean harbors run deep. Stemmed from agony deep inside and a thirst
for vengeance.

Melody is perceived as the beautiful spoiled princess that fell for a beautiful, confident stranger many years ago.
Two polar opposites. One night that changed everything without either of them
knowing it.
Can love conquer all? With the help from a mysterious stranger, Adele.
Who you may all know from a certain Cocky character’s life. Unlucky in love herself.
Anything is possible.
***This book is in conjunction with the Cocky Hero Book Club with Adele and maybe some of your other favorite Cocky characters guiding these characters through their journey. 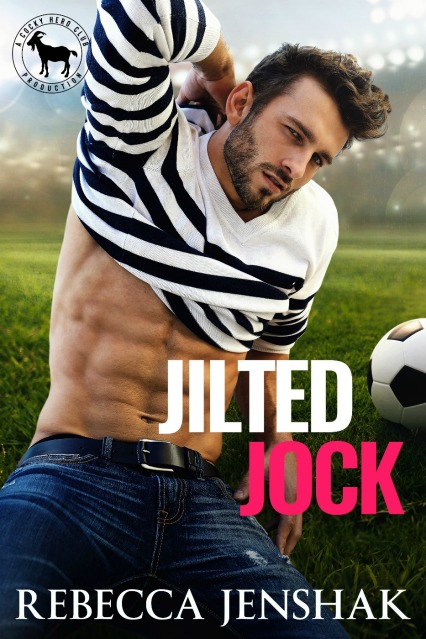 He was someone who belonged on the cover of Sports Illustrated instead of in my small beach town.
A sexy, cocky Australian soccer star named Finn was the last person I expected to be living with for two weeks.
He showed up at my brother’s house on his wedding night, hot, drunk, and very much not married.
Next thing I knew, we were roommates, spending nights watching TV and getting
to know one another.
Those two weeks turned into more than either of us bargained for.
He was fresh off a broken heart and I had a boyfriend.
I wasn’t supposed to fall for the jilted jock, especially when I knew we’d be going our
separate ways.
All good things must come to an end, right?
Except he’s not letting me go without a fight.

It was my time, a cross country drive heading home for my brother’s wedding to figure out my life after college. Me, my dog named Goat, and the open road.
That’s all I wanted.
He wasn’t supposed to be part of it. My older brother’s high school friend and my sister’s ex. The cocky boy my eleven-year-old-self hated.
The infamous Smith Blackburn.
AKA Smug Bastard.
The guy every girl wanted to be with and every guy wanted to be.
The day after graduation, he left town and disappeared, losing contact with my family. But nine years later, he resurfaces and becomes a thorn in my side once again.
After his motorcycle breaks down, my older siblings convince me to let him ride home with me. Kyle wants his old buddy at his wedding, and Kasey, still carrying a torch for him, wants nothing more than to see him again, convinced they are meant to be. It’s the last thing in the world I want, but I learned long ago going up against the powerhouse twins is futile.
After nine years, we’ve both grown up, but our mutual dislike lingers.
Though I can’t deny he is the sexiest man I have ever seen in my life. His piercing blue eyes, gorgeous rugged face, and muscular, tall figure belong on magazine covers. But he’s still a smug bastard, and I’m still the annoying little “Baby K.”
Spending every minute together in a tiny camper van starts to twist the lines of hate, igniting feelings and passions I’ve never felt before, shoving me out of my safety bubble. Tension grows, and nights are filled with strain and forbidden desire.
But I can feel him holding back.
Cagey and cryptic, Smith’s dark past hints at the surface.
When it finds us, nothing could have prepared me for the truth—the secrets that flip everything upside down.
I wasn’t supposed to fall for him.
He was never meant to be mine. 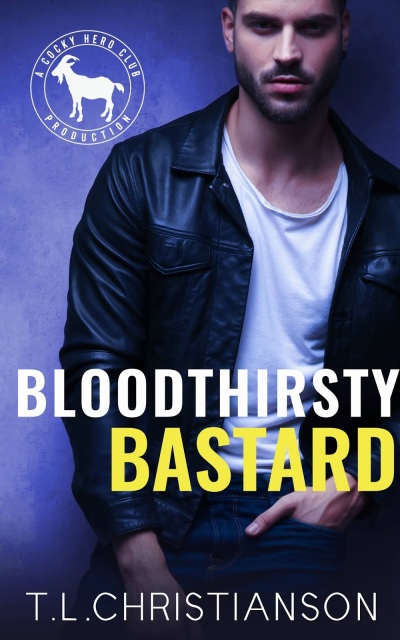 All Iwanted was to escape the scandal.
The job offer in California was the perfect opportunity to pack up and head West.
A dark, sexy, and mysterious new boss wasn’t in the plan.
And his secrets run deeper than just his business dealings.
When Ethan reveals who and what he truly is, it throws everything I ever thought I knew about the world out the window.
Vampire.
The word alone brings up visions of blood-sucking monsters.
Yet, Ethan is anything but.
Falling for him, with his dashing good looks and honed charm, was almost inevitable.
But we’re from two very different worlds, and the danger in his might just bring an end neither of us saw coming.
Bloodthirsty Bastard – a paranormal story from the Cocky Bastard world you know and love 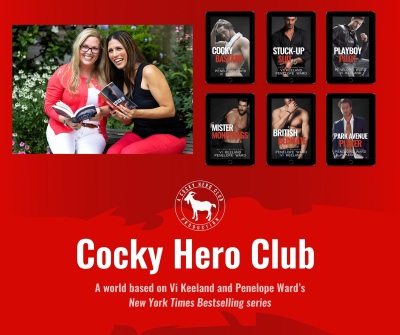