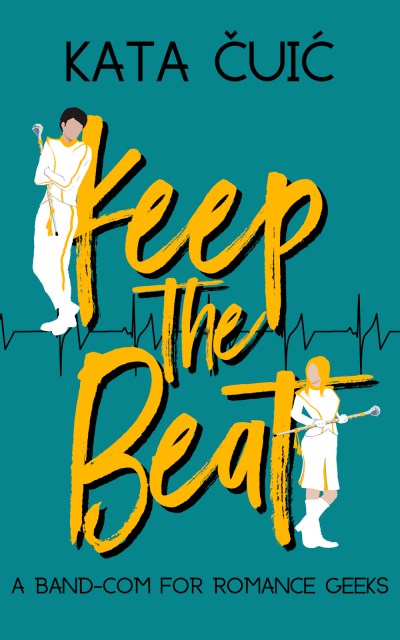 Sophia Reston has never been bothered by the term band geek. The definition of geek is an enthusiast or expert in a particular field or activity. She loves marching band with all her heart, so the term is appropriate. Of course, one of the lesser known definitions of a geek is a carnival performer who is often billed as a wild man and whose act typically includes biting the head off a live chicken or snake. This definition also seems accurate since there is one snake Sophia fantasizes about maiming in the most deliciously torturous ways—her archnemesis, James Fossoway.

He has a stupid nickname, stupidly attractive muscles, a reputation for sleeping around, and he is a fellow band geek. Unfortunately for Sophia, he’s also an enthusiast of pushing all her buttons—and not in a good way.

When their rivalry leads to one final showdown during the competition for head drum major, the entire band is invested in the outcome. And James has some new tricks up his sleeve to win the last battle they’ll ever wage against each other.

Because, after years of pranks, James isn’t out for revenge.
He wants Sophia’s heart. 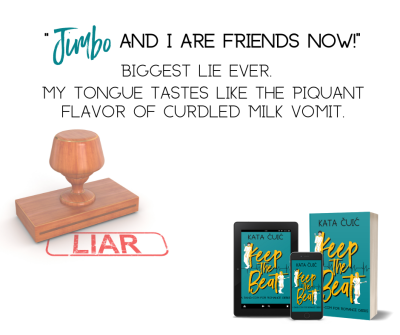 Excerpt
“Why is it so hard to imagine that I could put the needs of the band before my own? You might hate my guts, but you can’t deny you know me.
I love band, James. I’ll do anything to make our senior year successful.”
Silent laughter dances in his eyes. This is not the reaction
I was hoping to get from calling him James again.
“You mean, you’ll do anything to make your senior year successful.”
He never denies hating my guts. That’s noteworthy. Or not.
“It’s no secret or surprise every one of us wants the head drum major spot for ourselves. You, me, and the other guys are all going to be trying to get the votes. Don’t make it out to be some sort of covert operation that only I’m participating in.”
Only I am. And so are they.
Screw being an attorney. I should be a spy. I actually think I just said all that with a completely straight face.
“Is that right?” James nods, his gaze sweeping over my face like he’s trying to play hide-and-seek with all the lies piling up between us in this room.
“Yes, that’s right.” I struggle not to nod and raise my voice to the liar, liar, pants on fire octave.
“Okay.” James crosses his arms over his chest without stepping back, nearly knocking me off-balance. “Prove it.”
“Prove what?” That physical move was meant to reinforce this mental one. “That I love band?”
“Prove that we’re friends now.” He swings his finger in the miniscule distance between us.
Distance that feels stifling all of a sudden. Did the AC break down? Maybe I am dehydrated after all. I’m sweating while chills skitter down my spine.
“How?”
He rolls his eyes up and sticks his tongue in his cheek, making a big show of pretending to think about it when it’s obvious he already has a suggestion waiting to pounce out of his throat like a bloodthirsty tiger.
When he focuses his intense blue eyes on me, a sneery sort of smile creeps along his lips until he looks like a lopsided Joker.
It’s turning into a freaking circus in this tiny, tiny room.
“Kiss me.”

Kata Čuić lives in the suburbs of Pittsburgh, Pennsylvania, with her husband and three teens. She’s an actual marching band geek, and she attends alumni events for both high school and college whenever her schedule allows.
Her children wouldn’t exist today if she hadn’t fallen clarinet over tuba in love with her spouse during their shared time in marching band.
Coincidentally—or not—the kids are following in Mom and Dad’s footsteps. Band family isn’t fictional at all.
Author Links
WEBSITE 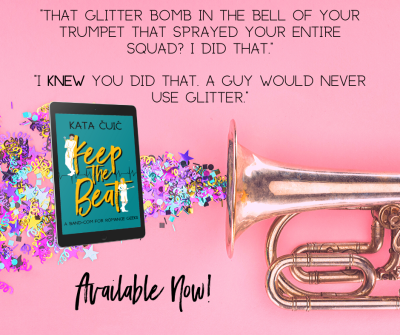 Keep The Beat was an hilarious and wild band comedy, colorful characters with no filter, passionate geeks about music and sizeable dose of emotion . I loved it!

But what I loved the most was the main characters’ well developed personalities, adding so much to this great storyline brilliantly carried out.

My heart’s still beating like a drum to this wonderful beat, the beat of their hearts as their primary source of rhythm.

Sophia and James are totally not in love but in hate of each other, competitive as hell and when in their senior year for the head drum major would be elected, well all bets were off.

All is fair in love and band.

I laughed so hard, totally in love with all their bickering and delightful back and forth.

Sophia is a strong and independent woman who had two passions: the band and giving hell to the sexy and cocky arch-nemesis, James. Making him sweat was also a too tempting and dangerous activity that would lead to confused feelings and bring their smoking hot chemistry to another level. Sophia was one stubborn to the core, building that tough exterior keeping people at bay and somehow unreachable.

After three years of resentment, lust turned into hate and pranks, well, things were going to change… for better or worse. You pick.

James is a complex character, on the outside being the life of the party, popular at school, a reputation with the ladies that preceded him. He was definitely more like he seemed to be, intended to make the show for sure and still he won me over with the other sides of his personality, with that strong hint of swoon and sexiness.

I had to admit that I was a bit wary about this story because I know the author’s ability to push the readers’ limit and I was afraid that at some point I would like to strangle any characters.

But I didn’t. Well, they frustrated the hell out of me a lot but in a good way. I was rooting for these two because they were alike in many ways.

Adding in the mix an audience of supportive characters who were living vicariously through their little war, especially Sophia and James’ moods would influence the band’s life as well.

I adored the banter and craziness in the air and how the author managed to bring such emotions into the characters’ history. Scratching the surface, underneath the reputation and good looks, enhancing the substance of their relationship. Some readers could somehow relate to the main characters’ issues and experience through life.

Characters are more matured and also acting like their age, but facing different experiences.

I was thriving for these moments when they show some vulnerability and put aside their weird relationship they’ve built through the years, which was their normality.

When all the walls and pretending stopped, it took an interesting turn, a beautiful story nonetheless still funny. It just got all I loved in a romantic comedy.

To keep the beat until the end and Kata Ĉuić did it with brio, with smooth efficiency and mostly with unawaring and energetic enthusiasm.