“Sharp writing, layered characters, and wonderful tension flow through this book, along with a super-swoon-worthy hero and a kick ass heroine I just love.” — Elizabeth Hunter, USA Today bestselling author

Code of Conduct, the first in the romantic suspense Cipher Security series of standalones, from April White is available now!

There are three things you need to know about Shane P.I.

2) Her specialty is catching cheaters, and

Gabriel is a security expert for Cipher Security, and a former UN Peacekeeper with a fierce protective streak that finds its focus on the beautiful P.I.

Their attraction is like an elephant in a room full of breakable things, and figuring out how to trust each other with their hearts, and maybe their lives, is the most fragile thing of all.

‘Code of Conduct’ is a full-length romantic suspense novel, can be read as a standalone, and is book#1 in the Cipher Security series, Knitting in the City World, Penny Reid Universe. 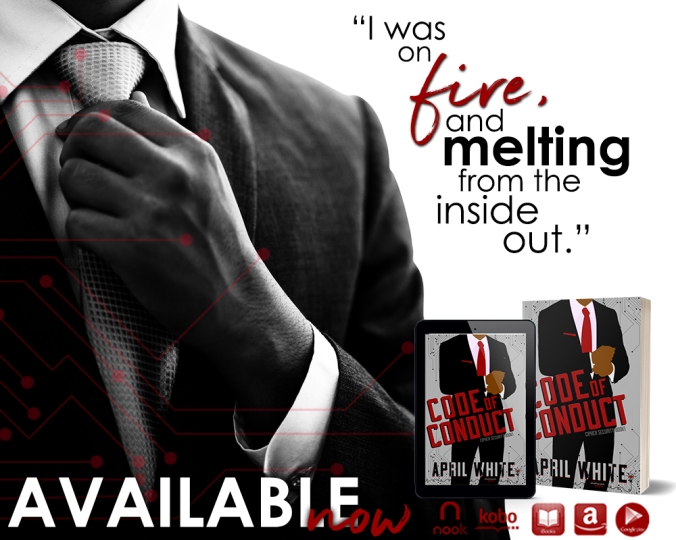 I pulled up the audio version of the newest Iron Druid book, turned my phone on speaker, and when the tub was full, I sank into the hot water with a sigh. Luke Daniels could read a shampoo bottle and I’d listen, but my mind kept drifting off of Atticus’ and Oberon’s adventures, and was instead hopping from rock to rock in the garden of ADDATA, the Quimbys, and Gabriel. I wasn’t even annoyed when the phone rang and interrupted the story, because I knew I’d have to go back to the beginning of the chapter anyway.

It was on its fourth ring when I finally dried off my hand and reached to answer it, so I hit the speaker button just as I looked at the screen.

Gabriel’s name startled me so much I didn’t say anything – I just sat up in the tub and stared at the phone.

“Please say you’re not in the bath.” Gabriel’s voice was quiet, deep, and had a note of pleading in it.

“What do you want, Gabriel?” I moved again, and the water sloshed around me. I knew he could hear it because he groaned softly.

“Where to begin.” It was almost a whisper, and the words sent a shiver through me. He cleared his throat and continued in his normal, beautiful voice. “We had a call from Quimby. He said he’d found you and wondered what we were going to do about it.” I didn’t say anything, and the silence lasted two long heartbeats. “Are you okay?” he finally asked, quietly.

“He saw me turn from Bryn Mawr onto Sheridan. I lost him in the alleys.”

“Aren’t you supposed to be finding his money? Or his wife? Or something else he misplaced?”

“Do you have his money or his wife?” he asked

“Okay? What exactly do you want from me, Gabriel?” I sat forward and the water sloshed again. I traced the ripples with my fingers as I heard his sigh.

“I don’t know. I just know that every time you move, I hear the water in your bath, and I imagine …” He exhaled sharply. “Be careful, darling. I don’t trust Quimby not to try to hurt you if he can. Don’t let him catch you.”

“You haven’t caught me yet, and you’re far more resourceful than that little man.”

He chuckled softly. “Yet.” He hung up the phone without saying goodbye, and Luke Daniels’ voice returned, continuing the story as I sank down in the water and let its heat lap over the chills on my skin.

April White has been a film producer, private investigator, bouncer, teacher and screenwriter. She has climbed in the Himalayas, survived a shipwreck, and lived on a gold mine in the Yukon. She and her husband share their home in Southern California with two extraordinary boys and a lifetime collection of books.

Her first novel, Marking Time is the 2016 winner of the Library Journal Indie E-Book Award for YA Literature, and all five books in the Immortal Descendants series are on the Amazon Top 100 lists in Time Travel Romance and Historical Fantasy.

*** ARC kindly provided  in exchange for an honest review ***

I couldn’t not read that one, especially settled in the Cypher Security Systems’ universe. If you have read the Knitting on the city series, you’ll be delighted to meet some characters from this series but new ones that you’d love on the spot.

That story that followed two characters whose magnetism and charisma were just outstanding. Gabriel and Shane had to team up to catch a few bad guys, when an investigation were the code of conduct should have been a rule, they slowly broke them one moment at a time.

And I adored that.

I’ve been utterly captivated by the intrigue, and in their journey to make things right, they found another one, when they didn’t have to follow this path alone and letting go, to reveal their true colors to the others.

Shane was that badass, sassy and brilliant woman who knew how to catch the bad guys and especially the cheating ones. As a PI, she was really good at her job, finding the weakness and finding a way to make them pay. Until one of her cases put her on Gabriel’s way, making her feel a little bit too much for the gorgeous Brit with his intense and powerful presence. And also too sexy and charming for his own good.

I adored Gabriel. Heartfelt, loyal and charming. The kind of guy who you could rely on when you earned his trust. As an agent of Cypher Security Systems he was just having another day of investigation but never expecting to find Shane. The unexpected and mysterious woman who made him wanting more but who was more locked down that anyone he knew.

I enjoyed this suspenseful story with a twist of romance, the investigation was engaging and I guess having some of my favorite people as supportive characters helped a lot but the author managed successfully to keep me captivated until the end. As the story unfolds and the mysteries revealed about this investigation, they learned to trust each other and take a leap of faith by collaborating together.

The swoon-worthy hero and the kiss ass heroine were an amazing team, efficient and working greatly together to find the bad guys. Can’t wait to read more!