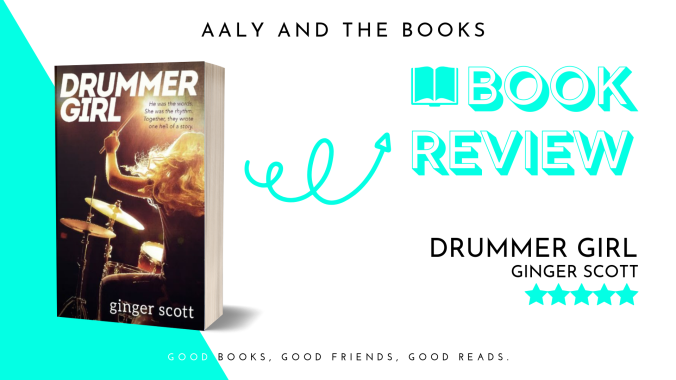 Arizona Wakefield was a beat without a melody. Living a half-breathing life in a half-finished neighborhood with parents who always wore half-hearted smiles, the high school senior only had one thing that let her color outside her family’s perfectly drawn lines—her drums.Jesse Barringer was a song without a chorus. The son of a washed-up rock star who’s also one hell of a deadbeat dad, he was given two things from his father—musical genius and a genetic link to the bipolar disorder that drives him mad.

One night in a garage at the end of a cul-de-sac in the middle of a bankrupt California neighborhood, Jesse’s melody found Arizona’s rhythm. An angry boy with storm-colored eyes found a blonde angel in Doc Martens with missing lines in her own story. Where her rhythm stopped, his words took over, and together, they wrote one hell of a story.

Ginger Scott is an Amazon-bestselling and Goodreads Choice Award-nominated author of several young and new adult romances, including Waiting on the Sidelines, Going Long, Blindness, How We Deal With Gravity, This Is Falling, You and Everything After, The Girl I Was Before, Wild Reckless, Wicked Restless, In Your Dreams, The Hard Count, Hold My Breath, and A Boy Like You.
A sucker for a good romance, Ginger’s other passion is sports, and she often blends the two in her stories. (She’s also a sucker for a hot quarterback, catcher, pitcher, point guard…the list goes on.) Ginger has been writing and editing for newspapers, magazines and blogs for more than 15 years. She has told the stories of Olympians, politicians, actors, scientists, cowboys, criminals and towns. For more on her and her work, visit her website at http://www.littlemisswrite.com.When she’s not writing, the odds are high that she’s somewhere near a baseball diamond, either watching her son field pop flies like Bryce Harper or cheering on her favorite baseball team, the Arizona Diamondbacks. Ginger lives in Arizona and is married to her college sweetheart whom she met at ASU (fork ’em, Devils).
Social Media Links:
Facebook Page: https://www.facebook.com/GingerScottAuthor
Twitter: @TheGingerScott
Pinterest: http://www.pinterest.com/thegingerscott/
YouTube: https://www.youtube.com/user/GingerScottAuthor
Google: https://plus.google.com/u/0/+GingerScottAuthor/posts
Goodreads: https://www.goodreads.com/GingerScott
Website: http://www.littlemisswrite.com

*** ARC kindly provided by the author in exchange for an honest review. ***

I’ve been intrigued since I’ve read the first chapters a few months ago. Drummer Girl is a story that will stay in my mind for a long time. Arizona and Jesse took my breath away, the calm and the chaos when reunited, created one of a helluva melody, going through joy, pain and angst.

What I appreciated the most with Ginger Scott stories was how she could talk about teenagers who in spite of their young age with substance and depth, the complexities of their minds and their experiences through this phase towards adulthood, with all the obstacles they had to overcome if they wanted to make it through.

And my heart was beating through the rhythm of their music, with this constant beat, the one that never ceases to exist even if they sometimes changed the tune, to the pace of their hopes and aspirations. Even in the silence, the characters’ pain and suffering were screaming out loud, how through music they could convey those emotions, like a therapy or their own.

When the girl with the rhythm met the boy with the words, you knew they would write the best songs ever, first and everlasting love.

I’ve been moved by these two, when the author raised awareness about some tough topics, as mental health or addiction. My heart cracked a little with these two and I was definitely a goner from the first page (even if Jesse was kind of jerk firsthand but still the bad boy vibes with a heart like this… swoon, swoon). It was sincere, poignant, so beautifully written, and mostly straight to the heart.