Thinking About You by Monica Murphy 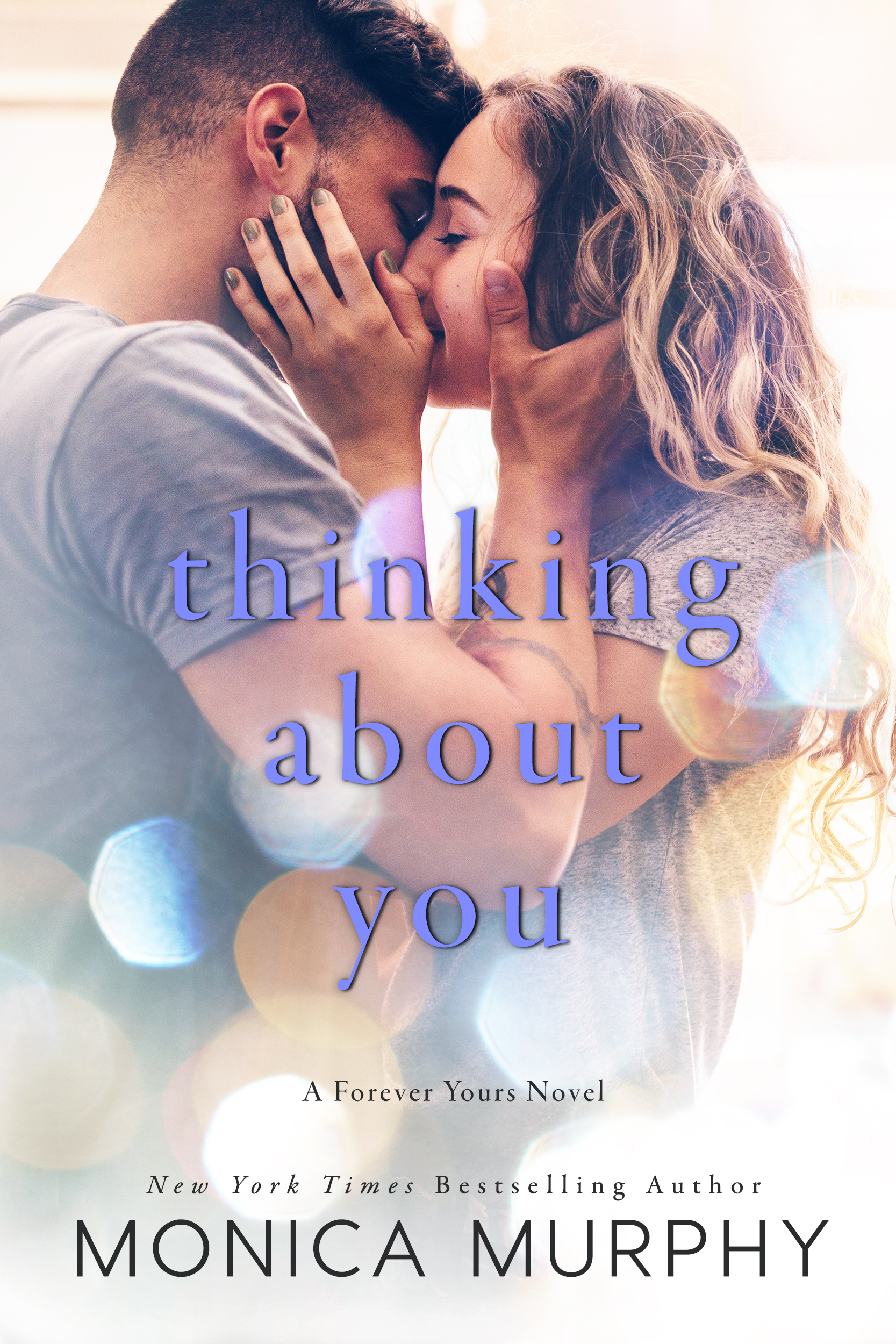 Thinking About You, a standalone contemporary romance in the Forever Series by New York Times bestselling author Monica Murphy

One minute I’m minding my own business at a party and the next I meet this woman who blows my mind. She’s beautiful. Smart. Funny. A little shy. I’m immediately drawn to her. We make an instant connection.

I live in California

She works part-time at an art gallery and lives off her family’s money.

Her family is nobility. I come from a single mom who always scraped to get by.

Susanna and I should have nothing in common. But when we’re together, it’s…

What are we supposed to do? Can we really make this work? I can’t give up my career. And I can’t ask her to move to California for me. All I know is, I want her in my life. 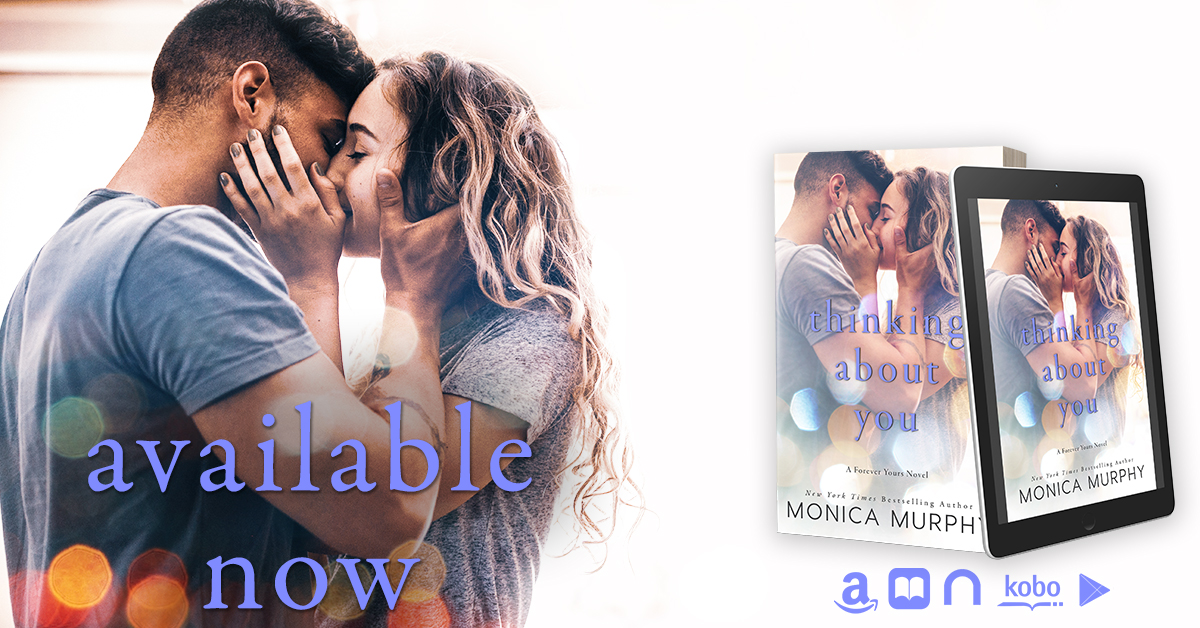 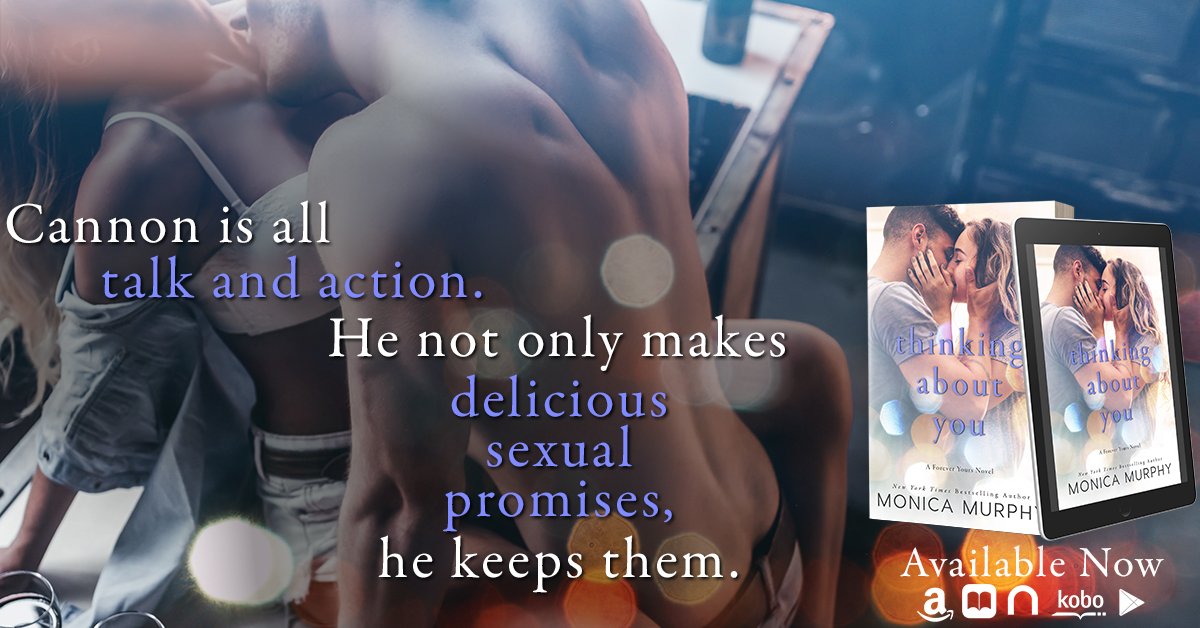 “I’m thinking about how beautiful you are,” I answer Susanna truthfully. She really is stunning, in that classic, elegant way some women are. She’s just very…refined? Is that the right word? Her cheekbones and jaw are sharp, her nose is straight, her blue eyes are extra bright and her full lips are the color of a classic red rose.

Her cheeks are the color of pink roses, thanks to the compliment I just gave her.

“Thank you. That’s very sweet of you to say,” she murmurs, casting her gaze downward for a brief moment before she lifts her head. “I can’t believe we’re here. Together.”

“Why do you say that?” I feel the same way, but want to hear her reasoning first before I make any confessions.

“You’re not my type,” she blurts, covering her mouth after the words escape for a brief moment before slowly dropping her hand. “Not that there’s anything wrong with you.”

I raise an eyebrow. “Gee, thanks.”

Her cheeks turn redder. “Oh goodness, I’m not trying to insult you, I just—I’m making a mess of this, and I apologize. What I meant to say is…” She takes a deep breath, exhaling loudly before she continues. “You’re not the type of man I normally date, but there’s something good to be said in that.”

She’s not the type I normally go for either, that’s for damn sure. She’s too prim, too proper, too sweet. “Like what?”

“There’s nothing wrong with trying something a little different sometimes. Clearly who I’ve been dating in the past hasn’t worked, since I’m still single,” she says with a self-depreciating laugh.

“I thought Dickie was your ex-boyfriend,” I point out with a wince. That is the damn worst name on the planet, I swear.

“Oh, it was never too serious with Dickie.” She waves a hand. Laughs again. “That was a long time ago, though.”

“I don’t know. Six months? Nine?” She tilts her head, as if she’s quietly counting back the months. “Eight months, actually. During the winter. He told me I was a bright light on a cold, dreary day once. That was nice.”

For some godforsaken reason, jealousy rises within me, making me clench my fists in my lap. “I guess he’s a goddamned poet.”

I would never think to say something like that to a woman. I’m not one to say a bunch of flowery nonsense to get between a woman’s legs. I’m a little more direct.

She seems startled by my response. “Oh, he wasn’t a poet. Not at all. That was probably the nicest thing he ever said to me while we dated.”

Huh. Well, I guess that makes me feel a little better, but not much.

And why the hell do I care what her ex-boyfriend said to her? This is a one-shot deal. I’ll take her to dinner, hopefully kiss her a little bit in the back of an Uber, maybe even feel her up a little bit too, and then we’re done. I’ll play my game tomorrow, we’ll win because that’s what we do, and then head back home.

The server returns to the table with our drinks, making an elaborate show of popping the cork on the bottle of Veuve Clicquot before pouring us each a glass. I didn’t want any champagne, but when Susanna lifts her glass toward me in a toast, I grab mine and clink our glasses together.

“New friends,” I agree, downing most of the champagne in one swallow.

Monica Murphy is the New York Times, USA Today and #1 international bestselling author of the One Week Girlfriend series, the Billionaire Bachelors and The Rules series. Her books have been translated in almost a dozen languages and has sold over one million copies worldwide. She is both self-published and published by Random House/Bantam and Harper Collins/Avon. She writes new adult, young adult and contemporary romance.

She is a wife and a mother of three who lives in central California on fourteen acres in the middle of nowhere along with their one dog and too many cats. A self-confessed workaholic, when she’s not writing, she’s reading or hanging out with her husband and kids. She’s a firm believer in happy endings, though she will admit to putting her characters through angst-filled moments before they finally get that hard won HEA.

Thinking About You was a sweet, pretty hot story with endearing characters. Watching two people falling in love but not living in the same place.

Cannon and Susanna didn’t live in the same country and a lifestyle so different, as that were almost not meant to be. Until they met in London, when the football player was just passing through for a game.

I adored how they connected, Cannon was a popular jock with a great career, living his dream but wanting deeply to find that someone, when the random hookups weren’t enticing anymore. I appreciated his personality, a bit of awkward and shy but so endearing. But when it came to the intercourse, he was a different guy, naughty and more confident.

Susanna was from nobility and looking for her place in the world, not living entirely in her family’s funds, a bit of posh but never arrogant. Being just the girl her parents raised with a high expectation to marry and be an obedient wife. But she wasn’t that way, a bit rebellious and having some issues with her mother about it. Meeting Cannon was the breath of fresh air she needed.

They collided in a beautiful way, and even knowing that what they shared would be temporary, the temptation was too strong not to surrender. I appreciated the upfront tone, it felt so natural between these two, a bit of sweetness and a strong hint of sexiness.

A relationship doomed for the start maybe. And the distance would strain the strong bond they created. They were hardships along the way but they never ceased to be honest, true to themselves and I was so rooting for them. I really enjoyed it.