Cobi Mayson knows exactly who Hadley is to him the moment he sees her for the very first time. That doesn’t mean it will be easy for him to convince her to take a chance on him.

Hadley Emerson knows she could fall hard and fast for a guy like Cobi. A man who seems to show up every time she needs him, but she knows better than to just hand over her heart.

Knowing his future with Hadley is on the line, Cobi begins to tie their lives together. As the invisible rope that connects them tightens and things between them heat up, an unknown threat emerges threatening to take away their happily ever after and send them both into darkness.
ADD TO GOODREADS 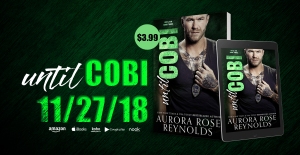 Aurora Rose Reynolds is a New York Times, USA Today and Wall Street Journal bestselling author whose wildly popular series include Until, Until Him, Until Her, Underground Kings and Shooting Stars.
Her writing career started in an attempt to get the outrageously alpha men who resided in her head to leave her alone and has blossomed into an opportunity to share her stories with readers all over the world.
Author Links
FACEBOOK
TWITTER
WEBSITE
GOODREADS
INSTAGRAM 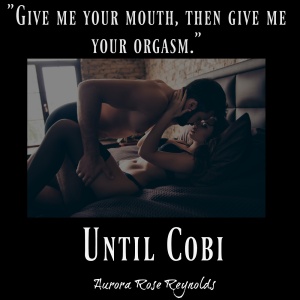 I adore this series. I’ve been following the Mayson’s family from the beginning and reading all the stories about “The Boom”, which sounded like a curse, meaning that when they would find love, they would first last expecting it but feeling it like a freaking boom. I kinda liked this idea, when each member of this family would find it, man or women and the journey they had once they met theirs.

Now it’s time for Cobi to get boomed. If you have read the previous series, you would know that the Mayson’s men are a bit protective, alphas men with big hearts and caring for their families. And when they found it, nothing would get in their way.

Cobi never thought about finding his boom after helping a woman, who was as much as brave than utterly unconscious about the danger they had to face with. One look, and she was already his. It was kinda crazy to feel that way, but when the author has some ways to make you believe in it. As a detective, he has seen so many things happening and the thought of seeing Hadley, the woman who saved his cousin’s life, Harmony being in danger, brought all the protectiveness on high alert, and that the moment he knew that his life would change.

Hadley didn’t know what gonna hit her when she met Cobi in some traumatic circumstances. A selfless woman who had risk her life to save another. Used to take care of her own, with a dysfunctional family, only having her best friend and her fiancé, Kenyon. When she met the uber-protective Cobi who gave her whiplash and having no boundaries, pushing her buttons, making her hot and bothered in a few seconds. I liked that he has to work a bit to get her, putting some challenge to make her see that they were the real deal.

I adored their chemistry and their banter that kept me entertained. Their antics made me smile a lot. Passionate, sexy and sweet.

The little glitch to me, but it was necessary to say, was about how Cobi was seen at times by Hadley, like the gorgeous guy who could have any girl he wanted. Told a few times throughout the story was a bit repetitive. Cobi was definitely more than this and Hadley needed to build some confidence. It came at some point for sure but still it bothered me a little.

Otherwise, the magic was still operating and reading about the Maysons was like going home. So heartwarming, comforting and charming. I’ve never been tired of reading about them, so excited to find about the next lucky one.