All My Life, an all-new standalone contemporary romance by Prescott Lane.

The beginning of any love story starts with the meet.

The greatest of love stories is that between a dad and his daughter. I should know. I’ve had a front row seat. First steps, first words, all the big moments.

Garrett was just a teenager when Mia was born. I’ve watched him braid his daughter’s hair, hold her hand crossing the street, seen her asleep on his chest. I’m the best friend, the one they can count on for everything from dance lessons to motherly advice, anything they need. I’m their go-to girl.

The best part of any love story is the happily ever after.

But what if the happily ever after doesn’t include you?

All my life, that’s how long I’ve loved him. 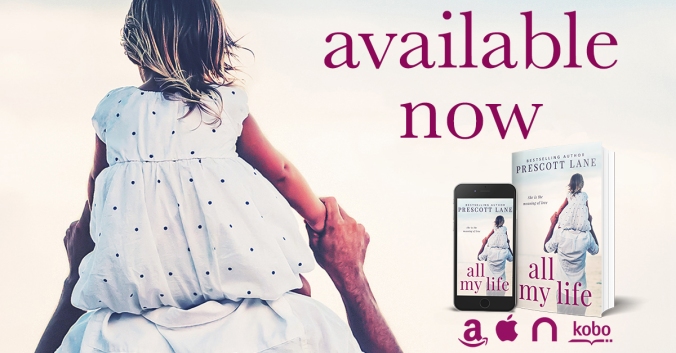 As far as dates go, this one has been good. I like her. She’s attractive, funny, smart, seems to have her head on straight. All the boxes are checked. This should be the point where I kiss her, ask her out again. I should be devising ways to get in this woman’s panties, but instead I’m thinking more about yanking down the tutu of one very sexy Biscuit Girl. I should be thinking about how to get this woman to fall for me, but it’s me that’s fallen. I should have one thing on my mind, and I do — Devlyn.

There’s just one big ass problem. She’s my friend. I can’t go there. There are so many reasons why I can’t go there. The town would have a field day. We’d have no privacy. Everyone would have an opinion. If we broke up, where would I get a decent cup of coffee? How would Mia react to this? Then there’s Scott, who’s actually the least of my concerns. Devlyn seemed pretty sure it was over, and if it’s not, I plan on convincing her.

I don’t want to lose Devlyn.

Staying friends guarantees her in my life. Dating her doesn’t.

Love doesn’t come with a guarantee.

Love is a risk. I used to be a risk taker, but teenage fatherhood buried that part of me. Stability became the name of the game. It had to. I look towards her diner, wondering if she’s back.

Prescott Lane is the Amazon best-selling author of Stripped Raw. She’s got seven other books under her belt including: First Position, Perfectly Broken, Quiet Angel, Wrapped in Lace, Layers of Her, The Reason for Me, and The Sex Bucket List. She is originally from Little Rock, Arkansas, and holds a degree in sociology and a MSW from Tulane University. She married her college sweetheart, and they currently live in New Orleans with their two children and two crazy dogs. Prescott started writing at the age of five, and sold her first story about a talking turtle to her father for a quarter. She later turned to writing romance novels because there aren’t enough happily ever afters in real life.

When I read that blurb and especially from Prescott Lane, I knew that I would be leading to an emotional story about an unrequited love… it was indeed but as much I adored Devlyn and Garrett’s chemistry, I’ve been left out.

How about a story about a woman who has been in love with her best friend all her life, a constant in his life; when he was in love with someone else, when he became a father and ended somehow being a mother but without the relationship and intimacy.

In this small town, Garrett’s life was going to be turn upside down when his daughter tried to play matchmaker. His daughter was his priority and never he would let someone else into his heart, after how he’s been heartbroken, fighting to be a single father raising his little girl.

The only one he loved but as a friend was Devlyn, the biscuit girl, sweet, a bit eccentric and always being there no matter what. She was a ray of sunshine, being this substitute mother figure to Garrett’s daughter. She’s been trying to move on and let him go but he kept coming into her life, without knowing her true feelings.

I was really excited to see how Garrett would finally open his eyes and see that what he needed was in front of him from the beginning. It took some meddling from his daughter and hints from his family to realize it.

However, I felt like it was at times a little easy for Devlyn to fall into his arms, and just like that. For a woman who has been in love and being hurt about this unrequited love, I wanted her to give him more trouble. Like just one day, he woke up from his haze and suddenly saw her in a new light.

I am a bit conflicted about this part, because I adored them as best friends, they had a magnificent and so natural chemistry. But everything went a bit fast to me, switching from friends to lovers. Even if Garrett was upfront about how he felt about her, honest and passionate, I really wanted more challenge, to bring that high level of emotions I would love to read.