Only You, an all-new sexy and emotional standalone from USA Today bestselling author Melanie Harlow is LIVE! 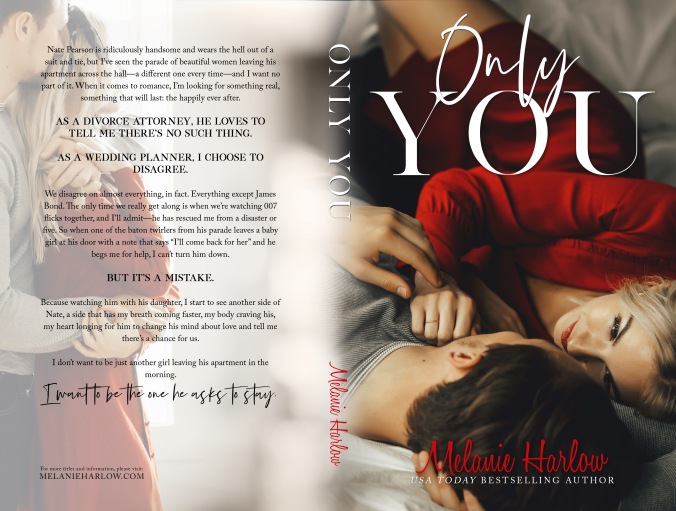 Nate Pearson is ridiculously handsome and wears the hell out of a suit and tie, but I’ve seen the parade of beautiful women leaving his apartment across the hall-a different one every time-and I want no part of it. When it comes to romance, I’m looking for something real, something that will last: the happily ever after.

As a divorce attorney, he loves to tell me there’s no such thing.

As a wedding planner, I choose to disagree.

We disagree on almost everything, in fact. Everything except James Bond. The only time we really get along is when we’re watching 007 flicks together, and I’ll admit-he has rescued me from a disaster or five. So when one of the baton twirlers from his parade leaves a baby girl at his door with a note that says “I’ll come back for her” and he begs me for help, I can’t turn him down.

But it’s a mistake.

Because watching him with his daughter, I start to see another side of Nate, a side that has my breath coming faster, my body craving his, my heart longing for him to change his mind about love and tell me there’s a chance for us.

I don’t want to be just another girl leaving his apartment in the morning.

I want to be the one he asks to stay. 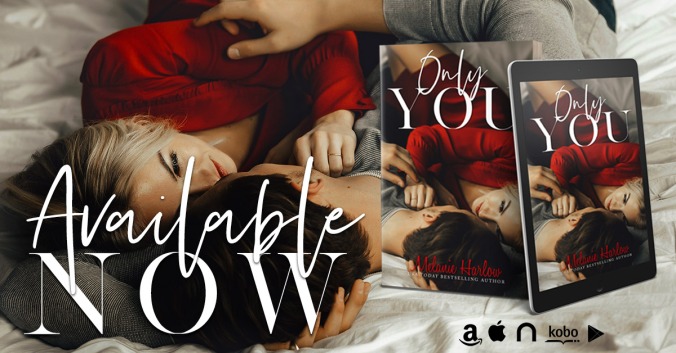 Read Only You Today!

“So did you mean what you said last night? About me?”

He grimaced, his eyes closing briefly. “I’m sorry about that. I shouldn’t have said it.”

“But you think it, right? That I’m a little girl living in a fantasy world?”

“No.” He put a hand on my shoulder. “I think you’re an optimist. I think you see good in people they don’t even see themselves. You build people up—especially me.”

“Hell yes, I do. You think I’d have been able to handle this whole fatherhood bombshell if you hadn’t been here? If you’d said, ‘That’s what you get for fucking around, asshole. Good luck.’”

I shook my head, a strand of hair coming loose from my bun. “I’d never have done that.”

“I know.” He tucked the strand behind my ear and moved his hand to the back of my neck. His eyes dropped to my lips. “But I would have deserved it.”

I held my breath. Things seemed to be happening in slow motion. His forehead came to rest on mine. And then our noses touched. Our eyes closed. An eternity passed, his lips a whisper from mine. Either one of us could have initiated a kiss. A slight lift of my chin. A little drop of his head. The question—will we or won’t we?—hung there between us, even as his closed lips brushed mine, eyelash soft.

I wanted nothing more than to wrap my arms around his neck and fit my body flush against his, but my wrists lay inert on the edge of the sink. Suddenly he spoke, his breath warm against my mouth.

“I think I’m having that dream right now.”

“Me too.” And then I felt it, the gentle pressure at the back of my neck, pulling my head toward him.

It was all I needed. Our mouths came together firmly this time, our lips opening, and I angled my body toward his, throwing my arms around his neck. His hands explored my back while his tongue explored my mouth, and he backed me into the corner, his hips pinning mine against the hard stone counter. He kissed with a fervor and intensity that surprised me, his mouth traveling down my neck, his fingers threading through my hair, pulling the pins loose, his body giving off heat that mine hungrily absorbed. I wanted to get closer to him, wished I could feel his skin against mine. I rose up on tiptoe to press against him, my back arching to fit the question mark curve of his body.

He felt big and strong and reassuring, exactly how I wanted him to feel. I wasn’t even sure what it was I wanted reassurance about… My desirability? Our chemistry? Something new and different happening between us? He swept his lips to the other side of my throat, a necklace of soft, insistent kisses that warmed my blood. When his mouth returned to mine, the kiss grew hot and frantic. He reached down and hiked the hem of my skirt to my waist, and I immediately jumped up, wrapping my legs around him. His hands moved under my ass and he carried me like that into the living room, never lifting his mouth off mine. When he reached the couch, he knelt on it and tipped me backward, stripping off his shirt and stretching out above me.

My hands moved lightning fast over hot skin, solid muscle. Chest and arms and back—I couldn’t get enough. His hand stole beneath the T-shirt I wore and I arched my back so he could reach underneath me and unclasp my bra, then moaned softly at the feel of his palm over my breasts. Moving down, he shoved the shirt and bra up to my neck and put his mouth on me, his lips, his tongue, his teeth, my nipples hardening into tight little peaks that begged to be licked, sucked, teased, tortured.

I ignored it, hooking my arms beneath his and pulling him up so I could kiss him again. I didn’t care what we were doing.

It felt way too good to stop. 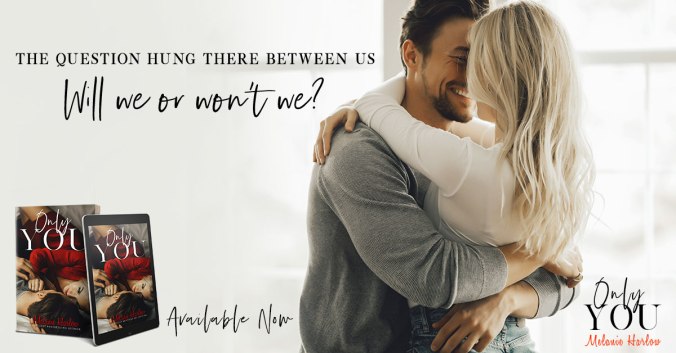 Melanie Harlow likes her martinis dry, her heels high, and her history with the naughty bits left in. When she’s not writing or reading, she gets her kicks from TV series like VEEP, Game of Thrones, House of Cards, and Homeland. She occasionally runs three miles, but only so she can have more gin and steak.

Melanie is the author of the AFTER WE FALL series, the HAPPY CRAZY LOVE series, the FRENCHED series, and the sexy historical SPEAK EASY duet, set in the 1920s. She lifts her glass to romance readers and writers from her home near Detroit, MI, where she lives with her husband, two daughters, and pet rabbit. 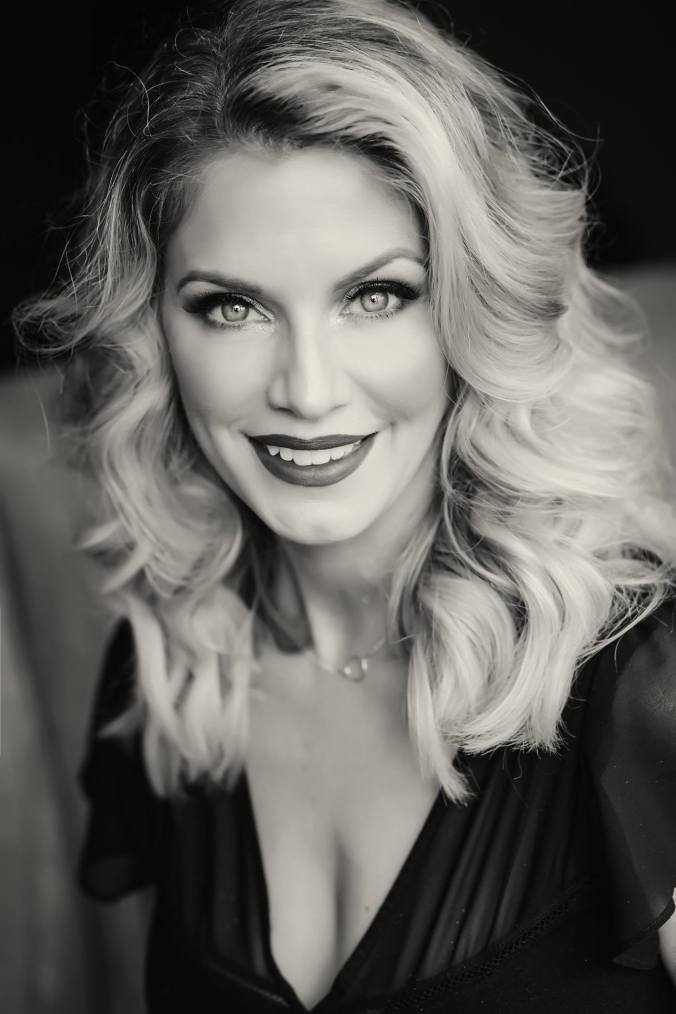 Sign up for monthly text alerts: Text HARLOT to 77948

Only You was a cute story, when womanizer Nate’s life taking a U-turn, becoming a father and finding love in the way.

Emme and Nate were neighbors but also great friends, the woman who believed in fairy tales and the man who didn’t. Two different visions of relationships, who were almost perfectly in harmony, having fun as friends, watching movies, flirting from time to time but never crossing the line, until committing phone Nate suddenly became a father, and then all the lines were blurred.

I do enjoy a sweet and romantic comedy, when you saw the characters falling in love, making you smile, swoon and all the things that romance readers are waiting for.

I was intrigued about the turning events and how the author would lead us. I couldn’t deny the chemistry Emme and Nate had but I didn’t connect with the characters. I haven’t felt any surprises when it came to their story. I wanted something different, less predictable, I guess.

I wished Emmie more tougher, less forgiving and giving Nate a run for his money. Even if she kept him on his toes, I was hoping more power, pushing him when he needed it and being “disposable” at times. Nate was definitely the epitome of the bachelor, never lying to Emme about his life, but confusing about his feelings for her, leading obviously to heartbreak.

I waited for a long time for Nate for being the one who would stay for Emme, fighting for her. As the story unfold, I saw Nate becoming a father, one step at the time, learning from his past mistakes, but it was going on circles at times and some things came a little too late. The whole thing “I need you but I don’t know how to love you without hurting you” drove me crazy.

The banter between all the characters was pretty good, I enjoyed some parts and some made me frustrated. It was good but the sparks were missing, this little thing that would have made this book a little more special. There were some great material for sure but it wasn’t enough for making me fall in love with them.