A stranger online. Dark hair and even darker eyes that knew my dirty desires before I did. A fantasy that should never be spoken. But he pulled the confession from me. And now he’s coming for me.Rough. Dirty. Dangerous.It’s supposed to be one night to get me off and make me forget.He’ll make me his and I’ll pretend I don’t want him to.I’ll run and he’ll chase. Because I asked him for this.I begged him for this.Tonight, in the darkness, he’s the hunter.And I’m the bait. 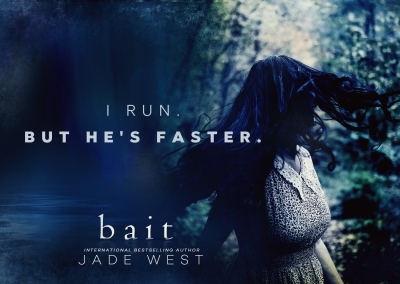 Jade has increasingly less to say about herself as time goes on, other than the fact she is an author, but she’s happy with this fact.

Living in imaginary realities and having a legitimate excuse for it is really all she’s ever wanted.
Jade is as dirty as you’d expect from her novels, and talking smut makes her smile.
She lives in the Herefordshire countryside with a couple of hounds and a guy who’s able to cope with her inherent weirdness.
She has a red living room, decorated with far more zebra print than most people could bear and fights a constant battle with her addiction to Coca-Cola.

I don’t know where to start … I am a sucker for Jade West’s stories and once again she managed to surprise and to shock the hell out of me. (always in a good way)

Reading Bait was like living the most darkest and probably twisted fantasies coming into life. The moment I started it, I couldn’t stop, addicted and utterly captivated. Delightfully and sinfully hot!

That kind of story may not be for everyone but it was totally mine. Right up my alley.

Abigail is shattered, broken and lost. She may seem to be fragile at first sight, searching and craving to realize her darkness fantasy, to find the monster that would make that come true. She is the Bait and waiting for someone to catch her, to make her hurt, to make her feel again.

Until she met a stranger online who brought up to life feelings that she haven’t felt for years, the temptation to surrender to the darkness was more than exciting and thrilling.

Told in dual POV, I enjoyed the feeling of the chase, increasing the sexual tension to another level, and oh my, as soon as the hunt started, all bets are off. Not only the author provided a strong hint of smut but also gave us what hopeless romantic hearts like mine wanted to see, a beautiful love story behind. The tenderness in the world of darkness. Two lost souls who had finally found each other but also themselves in the way.

The connection was intense with a strong growth of their feelings throughout the story. Accepting the other without conditions, scars and all. Never hiding who they really are.

As usual, it doesn’t beat around the bush, it’s straightforward, with tons of dirty talks, very wild and very descriptive when it comes to the sex parts, but never falling into stereotypes.

Her characters have always this singularity, a mix sweetness and vulnerability but also strength and fierceness at the same time. I really loved it.

I would definitely say that I may have swooned more than once and also having my jaw dropped a thousand times. My guilty pleasure for sure!