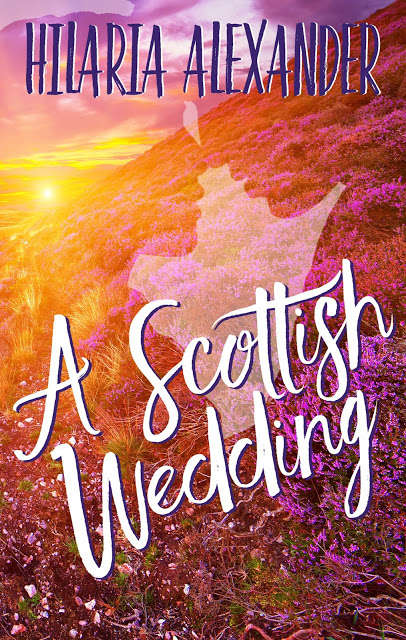 Fans of Lost in Scotland will love revisiting the heather-covered highlands as Sam and Hugh try to make their happily-ever-after a reality in this follow-up novel!

Ladies, Hugh MacLeod is off the market! We caught up with the sexy hunk from Abarath and his fiancée, makeup artist Sam Farouk at an event in Edinburgh. The pair met last year while working together on season one.

The Scottish actor looked handsome in a tailored dark grey suit, while the raven-haired beauty at his side turned heads in a golden lamé gown which channeled the iconic Marilyn Monroe dress of the same color. Ms. Farouk played coy when asked about the engagement, only revealing that the ring belonged to Hugh’s grandmother.

With a dreamy look to her groom-to-be, Ms. Farouk confessed his proposal was “fairytale worthy.” MacLeod charmingly deflected each one of our questions about season two of Abarath, saying he would get in trouble if he told us anything. When we asked if a date had been set yet, the engaged couple looked at each other for a brief second. Soon, they replied in unison in a way that turned us into mush. Ms. Farouk added that it will all depend on Hugh’s schedule and his commitment with the show. We wish the very best to the groom and the bride-to-be and we hope to bring you more news about their upcoming nuptials!

Hilaria Alexander was born and raised in the south of Italy, where her family still lives. She was bit by the travel bug early on and lived in Tokyo and Orlando for a while before settling down in Oklahoma City with her husband and kids.

She loves books—obviously—as well as movies and TV, and is addicted to award shows. She can’t play an instrument to save her life, but she loves music, which is one of her biggest inspirations when plotting new stories. If you have questions about her or her books, ask her on Facebook and Twitter, or email her at hilaria_alexander@outlook.com. For excerpts, news and giveaways, join her readers group.

** ARC kindly provided by the author for an honest review. **

I adored Hugh and Samhain, loved that they got their wedding!! Finally!!
This novella supposed to be a glimpse of the Hugh and Sam’s after their HEA in Lost in Scotland. It was split to me in two phases:

The first part was more like the honeymoon phase, these two having it everywhere, couldn’t help to keep their hands off each other. It was just repetitive to me, some parts as how they were managing to keep a bit of sanity with Hugh’s filming schedule, to maintain a balance on their lives was well written. I wanted to see more of this. I loved the slow burn romance in Lost in Scotland and I missed it.

The second part was better handled, because of the preparation of the wedding, such a big surprise and I don’t think I wouldn’t imagine a better way to read how they finally tied the knot. That part was more rhythmic and catchy, more entertaining. As much that I don’t mind some sexy bits from time to time, it was good to read something more than just these moments.

What bothered me in the first place was the sex parts, there were too many to me mostly on the first part, the second half was so much better. Even if I love these characters to pieces, I was expecting things differently, that would added something more to Hugh and Samhain’s story.