On Sale Now! Download A Promise Broken by Anissa Garcia!

In A PROMISE BROKEN, Hilary is in need of a distraction from her wounded heart, and that distraction comes in the form of Zach Collins. The only problem is, he’s her brother’s best friend. Readers will love this standalone contemporary romance, featuring characters seen in A PROMISE KEPT and A PROMISE MADE. 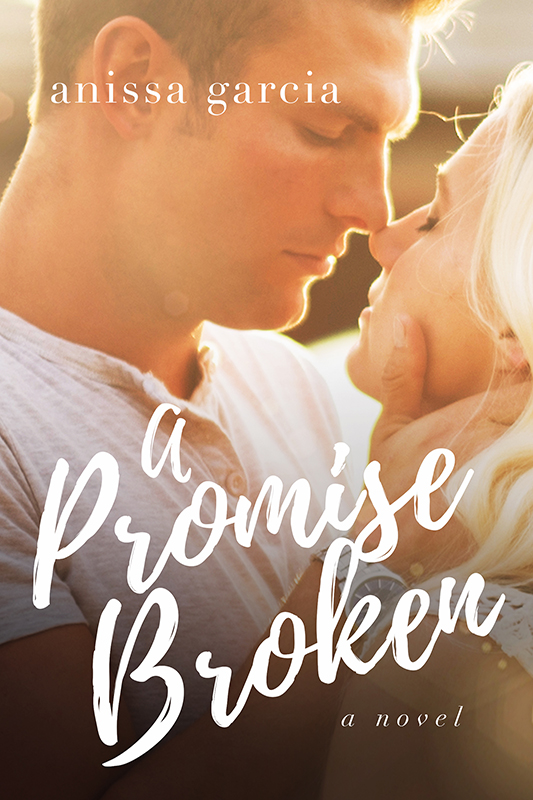 After a relationship gone bad, Hilary Matthews felt unsure about where she belonged or what to do with her life. Cue Zach Collins, a love ‘em and leave ‘em, no strings attached type of guy. The perfect distraction for her wounded heart. Just one problem. Zach isn’t some random stranger. He’s her brother’s best friend, and more than that, he’s practically family.  And to complicate matters, just when things start to heat up between them, she learns there’s more to Zach than he let on.

Zach’s job as assistant to an A-list actor allows him the luxury of women, travel, freedom and fun. But things changed the moment Hilary made her move, completely altering his world. Hilary is his fantasy come to life, his dream woman in the flesh…and his best friend’s little sister. Stepping over the line with her would not only ruin his friendship, but possibly alienate him from the only family he’s ever known.

The pressure mounts as truths are exposed. Embroiled in betrayal, lies, guilt, and heartache, Hilary and Zach must decide if the biggest emotion of all is worth the turmoil. With so much at stake, the repercussions from a promise broken would cause the battle of their lives.

Enter to win a $20 Amazon Gift Card from Anissa Garcia! Three (3) runners-up will receive an eBook of A Promise Kept

I didn’t say anything. Instead my eyes roamed down his body as he approached. His jeans and shirt were perfectly snug. He sat beside me grabbing the remote, and I was hyper aware of his proximity. He smelled like fabric softener and aftershave. It was familiar and comfortable.

“Hilary,” his voice was soft as his eyes met mine. “Stop looking at me like that.”

“Like you want me to make love to you,” he said breathlessly.

My heart skipped a beat. I fumbled with my hands. “Don’t flatter yourself, Collins.” His phone trilled from his pocket. He reached in to check it, looked at the screen and hit the end button. “Who’s Isabella?”

I rolled my eyes. “Bullshit. You know I can tell when you’re lying.”

“And your fuck buddy?” His eyes closed. Yup, he slept with her. His whole body tensed. “Do you like her?”

The pang of possessiveness that swept through me was familiar to when Graham said he was working late, and that his co-worker was just that. “Is she pretty?” I asked quietly.

“Oh.” Ouch, that stung more than I wish it had. I snapped out of my pity party and stood. “Well, then? Why aren’t you answering her call? You could be with her now.”

His bewilderment was obvious as I rushed to the window. It was hot and I needed a draft, and he was right. Drinking around each other wasn’t a good idea. He watched as I yanked on edges of the glass, trying to pry the window open.

“So? You don’t have to care for her in that way in order to fuck. You did it already, didn’t you?” I struggled, but it wouldn’t budge. “Dammit, the window won’t open, and it’s so hot in here.”

“Only once,” he mumbled, as if reluctant.

“Spare me the details, Zachary.” I tugged, becoming breathless as I fought against it. My voice pitched higher as I hit the edges with my palms. “Stupid window.”

He drew up behind me, placing his hands over mine. I froze as his body pressed against me. We lingered, my back on his chest. Fast paced breaths escaped him. His mouth was near my ear, the humidity of his breathing caused me to tremble.

“Gently,” he spoke affectionately, drawing the window up. The crisp air didn’t make a difference when his warm body was near mine. His hands wrapped around my waist and he squeezed for only a second as his lips descended between my neck and shoulder. He gave the skin there a sweet kiss. His lips lingered longer than they should’ve. “You’re beautiful,” he whispered. His nose grazed over my neck as he pulled away. “Graham will regret letting you go for the rest of his life.”

Chills ran down my spine, all thoughts of Graham long vanished. My ringing body turned, needing more of Zach’s touch. His warm palms cupped my cheeks. I wanted more of him. All of him. He looked amazing tonight. I loved the way his emerald green eyes anchored on mine, promising me my darkest desires were a whisper away. His thick, dark hair swirled in waves I wanted to run my hands through. His strong touch had me reeling, and when he denied himself being a good man, instead of pushing me away, it only made feelings trickle in through the cracks of my heart.

He backed off, headed to the stairs, escaping me, leaving me in complete need. Bitterness toward my brother was creeping over me. Zach wouldn’t lose his friend, his boss. I was a risk he wasn’t willing to take. I had to remember what Zach said when he left me that day. Hilary, this can’t ever happen. I was sure he’d stick by what he said. He was a good man, after all, and a good man didn’t break his promises, but maybe, just maybe, some promises were meant to be broken.

Praise for The Promise Series

“A super sweet, sexy romance that left me with the biggest smile on my face. I totally loved A Promise Kept!” – New York Times, USA Today Bestselling Author, AL Jackson on A PROMISE KEPT

“Anissa Garcia has the unique ability to draw out emotions that I didn’t even know I had.” – Devious Book Blog on A PROMISE KEPT

“This has to be the most beautifully and well written book that I have read this year!” – Danielle, Short and Sassy Reviews on A PROMISE KEPT

“A Promise Made was lovely, sweet, intriguing, and proved that true love can and will prevail. Five star contemporary romance.” – Audrey Carlan,#1 NYT Bestselling Author on A PROMISE MADE

“Anissa Garcia delivers us another sexy romance with strong characters you can’t help but fall in love with. She promises to be an author to watch out for and add to your must click list!” – Love Affair With Fiction on A PROMISE MADE

Other Books in The Promise Series

A PROMISE IGNITED (a short story)

Anissa Garcia resides in Austin, Texas and earned her Bachelor’s Degree in Speech Communications and English. She has held an array of jobs including Public Relationship Manager for Barnes and Noble. Wanting a change of pace, she moved to Los Angeles where she attended The American Academy of Dramatic Arts, and trained full-time in theatre. After working in Hollywood, she returned to Texas where she has written articles for Cosmopolitan and Lady Couture. When not writing stores, watching movies, or drinking a latte, she loves to daydream about romantic fictional men. You can find her online at  http://www.anissagarcia.com.

A Promise Broken is Zack and Hilary’s story. The moment I’ve met Zack in A Promise Kept, I wanted to read his story. I have to tell you, Anissa Garcia frustrated the hell out of me with this story. And I liked it. A lot. (I can’t even imagine that I would be saying this one day)

Above all, the author likes to maintain a certain degree of complication, Zack is Ethan’s best friend, who is as you might guess, Hilary’s brother. So off-limits with a capital A.

As the assistant of a famous actor, Zack was always the one to help people and always available for his best friend, maybe too much. Welcomed in the Matthew’s family since this young age, he could go anything to please his family, putting themselves first. When it comes to relationships that’s another story. Avoiding commitments and relationships seemed to be his motto, until Hilary decided to push his buttons.

Hilary was always seen as the indecisive sister, switching from one degree to another, exploring new horizons every time, trying to find her place. Very talented but lost professionally, she was always smothered by her big brother,who was definitely more than protective. Zack was his best friend, until they became “strangers”.

When Hilary is on a mission, and Zack her target, all bets are off, these two… so hot!

The girl he once knew turned into this brilliant and gorgeous woman who made him weak. One moment changed their lives and with all the unsaid things and assumptions, well the recipe of happiness can turned into a nightmare. They were both hot-tempered, stubborn and definitely feisty.

I kinda liked the way Anissa Garcia’s could write stories such as sweet and hot. From best friends to lovers, once the line was crossed, it was no turning back. Even with all the things that might separate them, (I’m pissed at you M.Evan Mathews), it was a long way before their HEA but I won’t have it any other way.