The Shape of You, a sexy, heart-warming MM romance by Felice Stevens is available now!

Too big. Too fat.

All his life Eric Sontag has judged himself on his size, believing love and friendship aren’t in the cards for someone like him. Tired of being alone and scared of his doctor’s warnings, he enrolls in a nutrition support group, determined to change his life. When a beautiful thin man sits next to him, he can’t believe they have anything in common, but conversation between the two soon proves first impressions aren’t always what they seem.

Corey DeSantis has always been the scrawny waif; he’s tired of struggling with his art and with life. Scarred by the disappearance and death of his drug-addicted mother, he doesn’t wish for love, believing it will bring him nothing but pain in the end. Now his only hunger in life is his desire to paint…until a health scare and his mentor force him to attend a nutrition class where he meets a man who piques his interest. One drunken kiss later, Eric is all Corey can think about.

The same, yet different.

An unlikely friendship is born with both men wanting more but afraid to listen to their well-guarded hearts. When Corey receives shocking news leaving him angry and helpless, it’s Eric he leans on, to help see him through, while a surprising career opportunity finds Eric leaning on Corey for advice. One night of explosive passion leads to a second and soon neither man can imagine a life without the other. Life is shaped by the challenges accepted and roads not taken but as Corey and Eric walk the path together, they’ll discover the most beautiful destination of all. Love.

Feeling Corey’s lips smile against his back, Eric rolled over to face him. Damn, he was so beautiful. Eric had no idea how he’d gotten so lucky to have Corey want him, but as long as he did, Eric would make the most of it, even though he knew how much it would hurt to say good-bye. Because Eric didn’t expect a future or even a tomorrow, he’d take these moments and tuck them away for later.

Yawning and scratching his head, Corey shook the hair from his eyes. “Like the dead. Man, you wore me out.”

They gazed at each other, Eric feeling the heat rise to his face. He’d never been intimate with someone he wasn’t emotionally invested in, but something about Corey mesmerized him. Eric was the helpless moth, and Corey possessed that incandescent glow that drew him so close, he could feel the singe of fire.

“Um, well, after we shower, I think I should make breakfast for us. We never had a chance to write down our dinner last night or anything, and I think that’s important.”

“We kinda got busy with other stuff.”

His heart jumped at Corey’s infectious grin, and he knew from the sensuous glow in Corey’s eyes, he too wanted a repeat of the night before. But pushing aside thoughts of kissing Corey and sucking his cock, Eric focused on the practical.

“Uh, yeah. What do you want for breakfast? I have eggs or oatmeal and fruit. Think about it.”

He closed the bathroom door behind him and rested against it for a moment, overwhelmed by the previous night, then waking up to find Corey hadn’t changed his mind and remained attracted to him. He wondered what would happen if he did lose all his weight. Would Corey want him then? 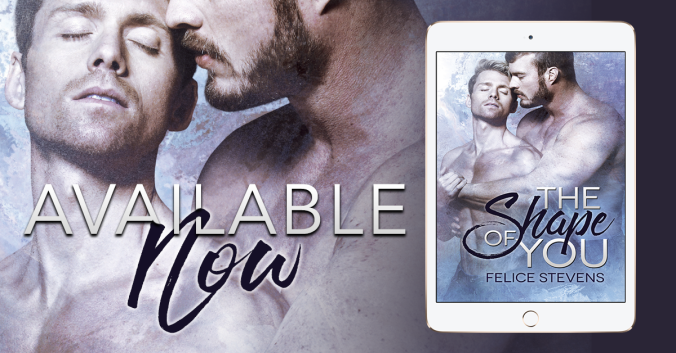 I have always been a romantic at heart. I believe that while life is tough, there is always a happy ending around the corner, My characters have to work for it, however. Like life in NYC, nothing comes easy and that includes love, but getting there is oh so fun and oh so sexy.

I live in New York City with my husband and two children. My day begins with a lot of caffeine and ends with a glass (or two of red wine). I practice law but daydream of a time when I can sit by a beach somewhere and write beautiful stories of men falling in love. Although there are bound to be a few bumps along the way, a Happily Ever After is always guaranteed.

Stay up to date with Felice by signing up for her newsletter here:

The Shape of You was a beautiful story about self-acceptance.

In this book, Eric Sontag and Corey DeSantis shared their story, heartbreaking and right and the feels.

Eric and Corey; two opposites. I liked to read for once this kind of story, talking about regular people, who got flaws, and mostly you can relate to them. The main point is really liked that vision that Felice Stevens shared with the readers, with this couple, you’ll see what is like to find the one that complete you, no matter how many hardships stand on your way.

These two men aren’t choosing the easy road, but the two together they can fight everything. Smart, very heartfelt. Corey was seen like the handsome one, too charming for his own good, Eric was the opposite, he defined himself through the eyes of others, struggling with his weight all his life. What seemed to separate them brought them together.

Why did I give 3 stars? The main reason is that even for all the interesting points and things that I appreciated in this story, there’s one thing that really matters to me when I read a romance novel, whichever genre, is the first encounter, believe it or not, it has to be something that pulls you in. It felt like a bit off to me, it took me awhile to get this connexion, in spite of Felice Stevens’ writing style.

Overall, heir story showed about how it’s important to accept ourselves as we are with our strengths, our feelings, our needs and our weaknesses.