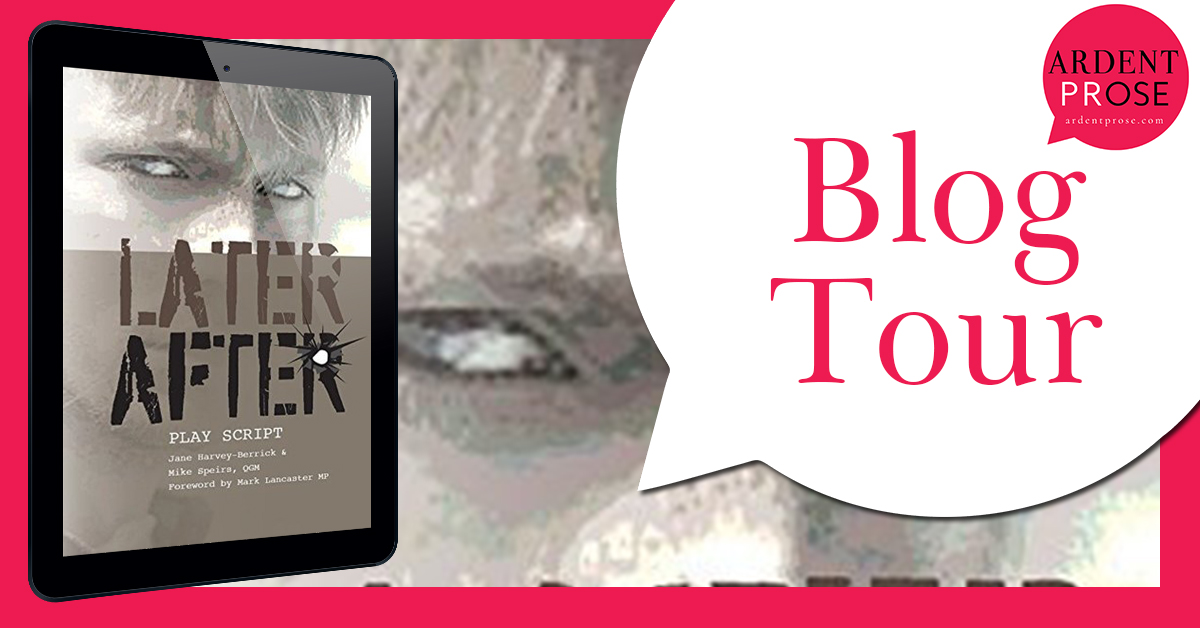 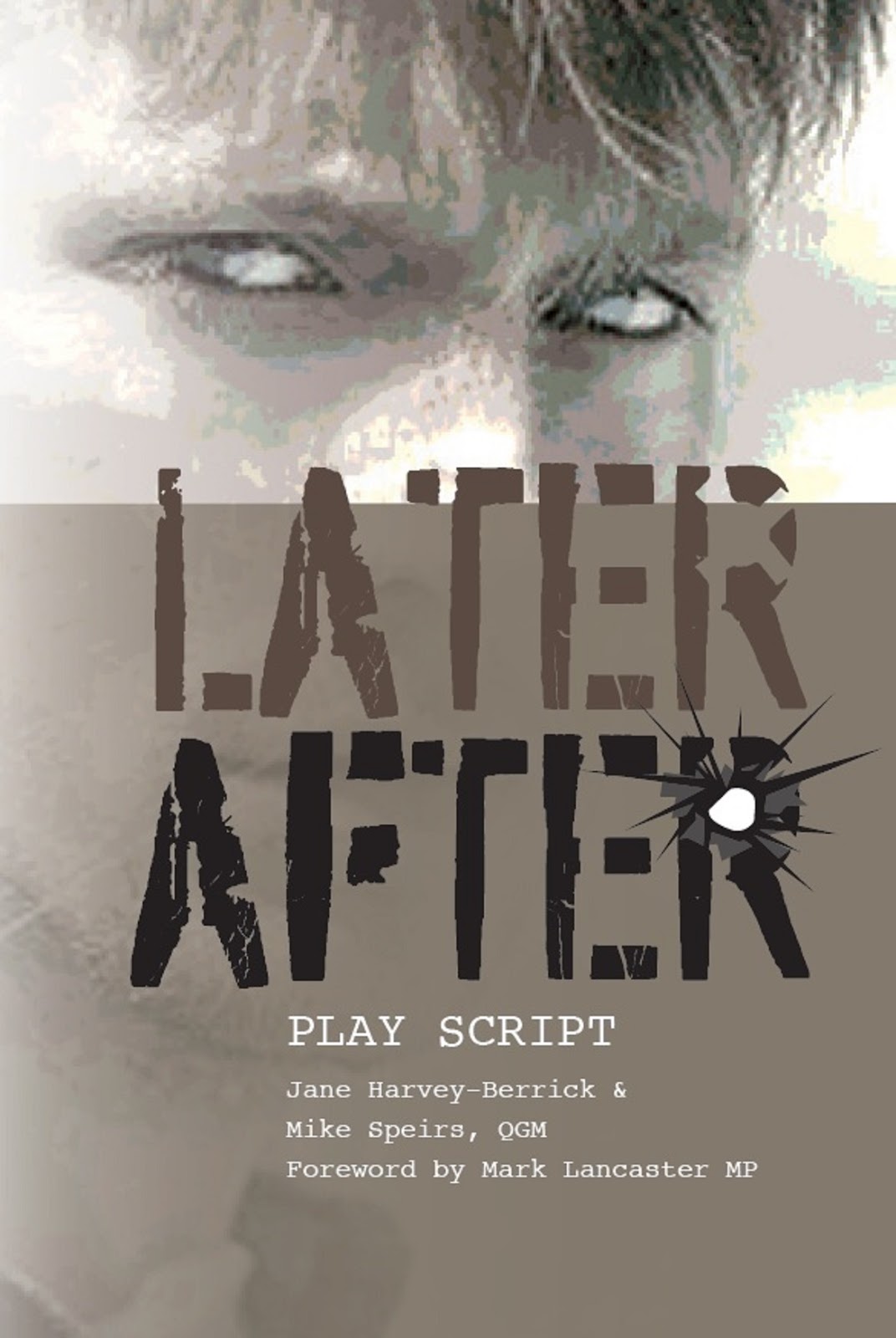 This is the full playscript for LATER, AFTER with commentary by the writers, actors and producers.
Since being discharged from the army after tours in Iraq and Afghanistan, Alex’s life is out of control and he keeps people at a distance – even his friends. When Alex is arrested after yet another bar fight, he finds himself in a police station being interviewed by police psychiatrist Dr. Helen Ashton. As Alex’s story unfolds, he tells Helen about his life of duty in a series of traumatic flashbacks. Can she help him find a way to navigate the unfamiliar, twisting paths of civilian life, or will he choose to sink deeper into a cycle of avoidance and depression? Is there a life for Alex, later, after the military? “Harrowing” “Thought provoking” “Challenging” A companion DVD is also available, filmed at the original London production of ‘Later, After’.
Proceeds support Felix Fund, the UK bomb disposal charitywww.felixfund.org.uk

Extract from the end of ACT I​
ALEXThe curse of my job is in the details. HELENI still maintain that what you were doing was worthwhile. ALEXYeah? Shall I tell you the rest? We left the scene in the hands of the Iraqi fire brigade. It came through later that they found no sign of explosives and there were two more bodies in the back of his car … he had his wife and child in the back. I mean what the fuck? Why didn’t he get out of his car? No-one blamed me for making the call, but I have to live with it. Rumour is he’d killed his family as you could still see the throats had been cut on the two corpses and he was trying to get us to finish him off; either way it’s not like the Iraqis tried to find out. Just another bullshit incident that never made the UK news. You people have no idea what it’s like out there.   We weren’t winning. It was all just fucking pointless. Why are we there? Can you tell me? Because I haven’t got a fucking clue. When I’m out there, I’m there for my friends, for the boots on the ground – no one else. And what have we achieved? Did we make the world any safer? Is it any better for anyone living there? It’s all been so fucking pointless. All for nothing. [Getting really wound up] The cunt politicians – where the fuck are they? Hiding behind their fucking desks and pointing their fingers at each other. We’re sent out there with second-rate equipment and… [Getting more and more wound up and anxious, shaking] HELENAlex! Alex! Stay with me. You’re safe now. Stay with me. Remember you are at a police station. Focus on your breathing… Alex struggles to maintain his focus. Helen leans towards him; Alex leans away from her. ​​HELEN (cont.)I think we should take a break now. Okay? Okay, Alex? ALEXI’m fine. He’s angry that she’s seen him vulnerable and turns away from her. ​HELENI’ll get you some more water. Try to relax. Helen stands up and exits room. Slowly, Alex gets to his feet. He runs his hands over his face, stares out at the audience – uncomfortable eye contact. He stares around, finds the chair, and slowly sags into it. His head slowly sinks into his hands. END OF PART ONE 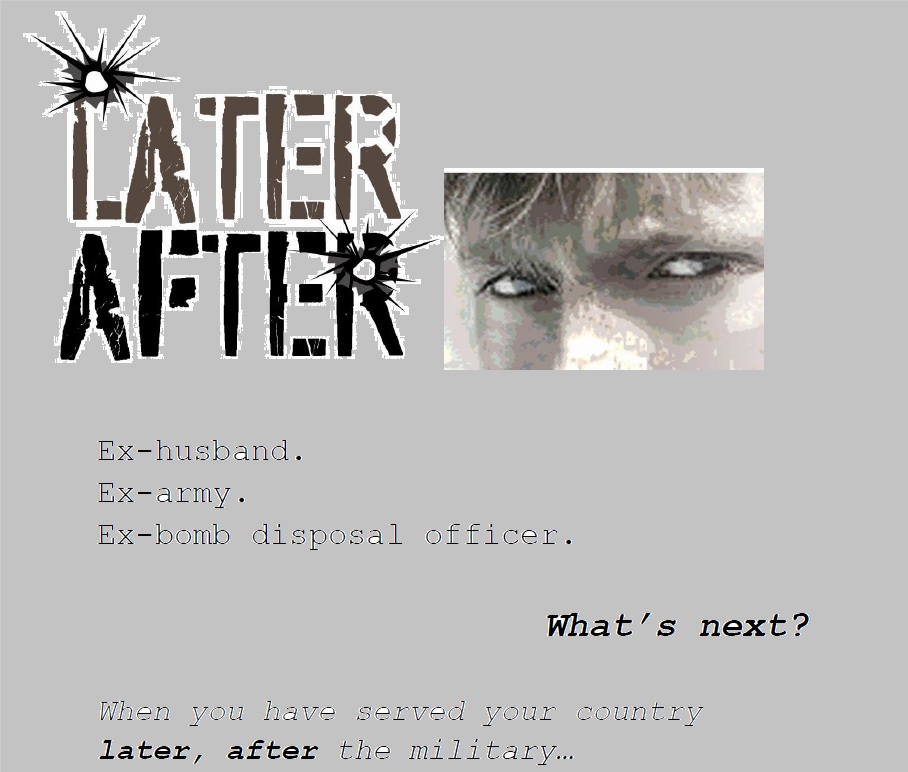 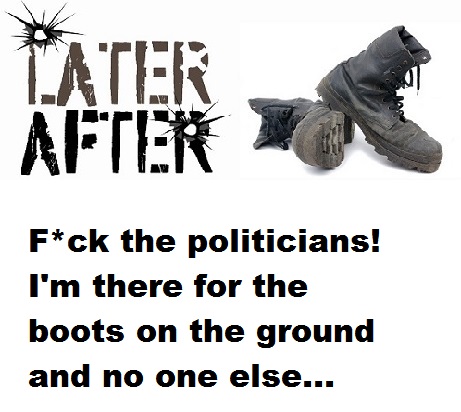 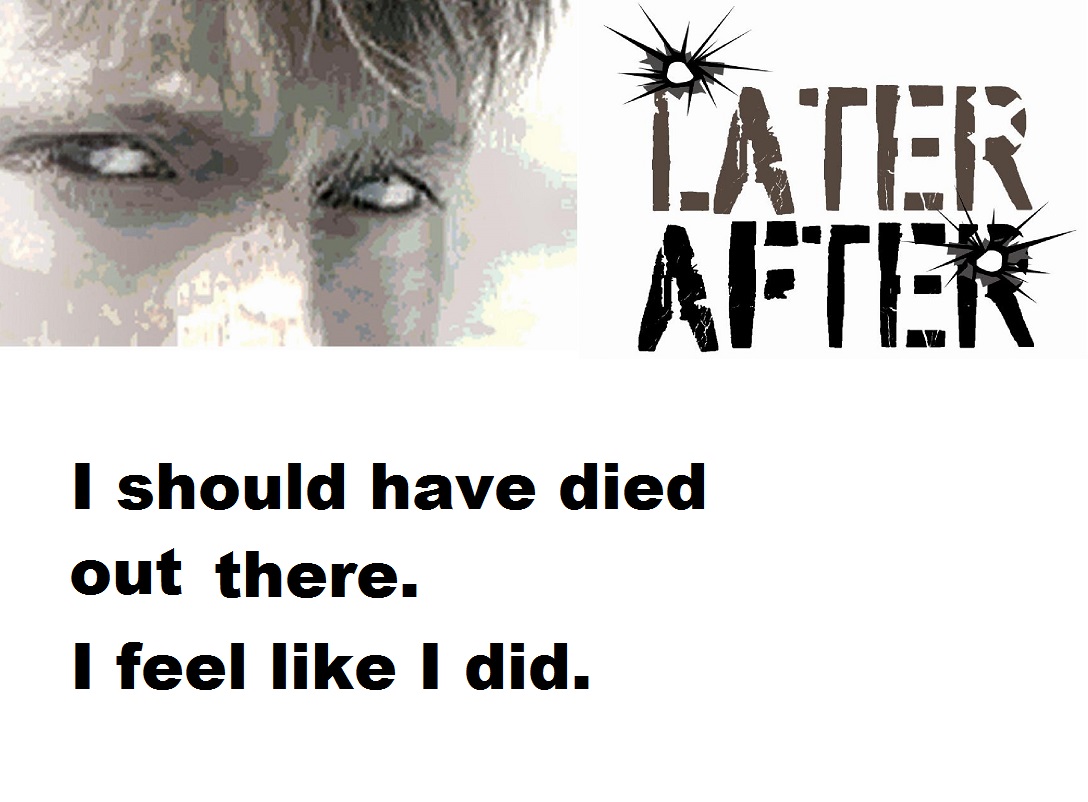 Jane is a writer of contemporary romance fiction, known for thoughtful stories, often touching on difficult subjects: disability (DANGEROUS TO KNOW & LOVE, SLAVE TO THE RHYTHM); mental illness (THE EDUCATION OF CAROLINE, SEMPER FI); life after prison (LIFERS); dyslexia (THE TRAVELING MAN, THE TRAVELING WOMAN).
She is also a campaigner for former military personnel to receive the support they need on leaving the services. She wrote the well-received play LATER, AFTER with former veteran Mike Speirs. (https://www.youtube.com/watch?v=hk1CyB8c0xA )
Author Links
Web Facebook  Twitter  Amazon Page Goodreads Instagram

** I was given an copy in exchange of an honest review. **

It’s been awhile since I’ve read a play. Later, After intrigued me. This play deals with a man’s struggle after his experience Iraq and Afghanistan.

So here we are, broken man and a psychiatrist. A closed session in a police station.

It was powerful, quite dark and with sarcastic tone and bit of humor, balancing efficiently and lessening a bit the heaviness of this topic, the trauma, aftereffects of the men fighting for their country and left behind.

Alex is utterly tormented and traumatized, trying to forget the atrocities of war, by messing up a lot and mostly drinking.  His instinct of self-preservation was humor and sarcasm. Behind this kind could not care less attitude, we could see that scars ran deep, and that had lost faith in people and life. Depressed and bitter.

Helen is the psychiatrist trying to evaluate Alex’s state of mind. She remained strong in spite of Alex’s constant rejection and blocking any attempts to confide and let it go. I liked her tenacity and flexibility, perfectly adapting to his behavior, never letting it go.

I liked the dynamic of this duet, powerful. It was really interesting and captivating. This interaction subsequently executed delivers a message filled with truth, depicting a sad reality.
Hopefully the humor helped and turning this story into something not depressing but telling the truth, blunt and raw.