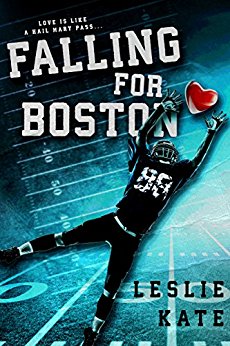 To Dylan Riley, love is like a Hail Mary pass; chances are you’re going to miss.

As the youngest of four, Dylan has always been the baby. But don’t let that fool you; she’s not your average baby sister. Growing up with three older brothers left Dylan with a lack of femininity and in its place, a real guy’s girl personality. Sports, beer, burping, you name it; but don’t even think about going near her feet with a pair of heels.

When Dylan meets Tyler Vaughn, the famous and devastatingly attractive football superstar at work one morning, she’s thrilled by his good stats, not his good looks. But the wide receiver—and sweet romantic—throws her for a loop when he pursues her despite what she knows is missing, her feminine charm.

Now Dylan must reconcile the fact that this guy may actually like her, and even scarier, she may like him back. Dylan speaks sports and sarcasm fluently but romance, now that’s something completely foreign to her. What’s an emotionally-allergic guy’s girl supposed to do with a hopeless romantic?

Leslie Kate, despite growing up in Upstate New York, is crazy about everything Boston. She attended the University of Massachusetts Amherst where she studied sports broadcasting. There, her lifelong Boston sports addiction blossomed into the fanatic she is today.

Having dabbled with the idea of writing a book since high school, she finally put pen to paper (or fingers to keyboard) and wrote her first book, “Falling for Boston,” where she combined her passion for the written word with her passion for sports and the City of Champions.

Aside from being a sports nut, Leslie Kate love reading (much to the chagrin of her boyfriend), movies, music, and being active (she’s a spinning instructor at her gym.)

She also loves cooking, but not cleaning; dogs, but not cats; and shoes, but not purses or jewelry. She owns one pair of Christian Louboutins that she sometimes just wears around the house because she likes to look at them.

*** Copy kindly provided by the author for an honest review. ***

I am definitely falling for Boston, a good debut novel. It was refreshing and I was glad to read about a sport romance a bit different from the ones I used to read.

Dylan is the tomboy, tough strong and she lives, breathes sports. When she stumbled into Tyler, well it was kinda love at first sight to him. Dylan not so much, more interested by his games or statistics than his personality. I usually don’t mind heroines who were less feminine but she seemed to me a bit insensitive and selfish at times. Her character lacked some roundness and nuances.

Well Tyler was a surprising character, more “feminine”, hopeless romantic, total opposite of Dylan. I really kinda liked the guy; there were no crazy ex girlfriend, he wasn’t a womanizer or the usual jock you met in a sport romance, and it was good and so refreshing, making him more attainable and real.

I appreciated his interactions with his family, his best friend. Always caring for his loved ones.

Even if I didn’t click with her heroine, her duet was kinda functioning and so good first. The way Tyler was trying to get to know her and being part of her life was really sweet and endearing.

As the story unfold and their relationship turned into a romantic one, Dylan’s behavior made me cringe a little. More than a little. Some parts were to my mind too dragged out and gave some heaviness to the story. Just a tad longish.

In spite of that little shortcoming it was a good sport romance, funny, sweet, with great supportive characters.