Just when you think you’re lost, you might end up falling in love.

Sam Farouk is having a bad year. Things went down the drain ever since she found her boyfriend cheating on her at the Golden Globes. An unfortunate turn of events forces her to trade sunny Los Angeles with the rainy, chilly highlands of Scotland. She has the chance to work as one of the makeup artists on a new TV series based on a fantasy saga everyone is bananas about, but she can’t help feeling lost and a little bit homesick. Until she starts falling for Hugh MacLeod, the actor set to impersonate the titular role of Abarath, dragon slayer and part-time Casanova.

Hugh MacLeod is ready for his big break. After more than a decade taking every possible acting job just to stay afloat, he can finally show his range in a series to be proud of. Hugh’s commitment to his career comes before anything else, and that’s part of the reason why he hasn’t had a serious relationship in a while. But the more he’s around Sam, the more he knows he’s in deep, deep trouble. How is he supposed not to fall for the sexy, mysterious brunette who works all over him every single day? Every touch, every look is torture.

Getting lost in each other might be wrong, but it could end up being just what they need.

“It’s so beautiful, Mom.” I pointed the camera of my phone to the scenery in front of me.

“I can see that. It’s just as stunning as you see on TV. So green.”

“It’s almost too much to take in all at once.”

Scotland was intimidating in a mysterious kind of way. California was what I had known all my life, and I’d barely even spent any time around the United States. Save a few times in London with my father and my siblings to visit my grandparents, I hadn’t been anywhere else in the world. Scotland was as foreign and new as it could get, but now, it was going to be my home for the next eight months. I switched the camera back to me.

“Have you met any of your coworkers?”

“Not yet, just one of Mira’s friends, Lainey. She picked me up at the airport and took me to my place. I have a roommate, but I haven’t met her yet. Some of the crew was out bonding last night. I missed it.”

“Oh, well. You’ll have time to get to know them. You’re lucky you got this gig at the last minute.”

“Samhain, everything will be fine. You’re a talented makeup artist. You know you got this job because of your extensive resume and not just because of a phone call.”

If you say so, I wanted to tell her, but I just nodded. I hoped my mother couldn’t tell how scared I was. I knew I was overreacting—I was twenty-nine-years-old, for crying out loud. I was acting like a kid leaving for college, but this actually was my first time away from home, away from my family, my friends…my sister, my brother. I was going to miss them so much.

“Maybe I’ll come visit you,” my mother said. “I heard the male lead on this production is quite the hunk,” she joked. I saw her wink through the screen, and just like that, she brought the smile back to my face and washed away my fears. I laughed and rolled my eyes.

“What? I might be old, but I’m not dead. I can appreciate a handsome man when I see one.” She shrugged. “Who knows, maybe you’ll meet someone cute.”

“I don’t think so. My goal is to lay low for a while. Love only leads to drama.” I knew that all too well.

“Oh, honey…I’m not talking about love—”

“No, Sam, let me say what I have to say. Sweetheart, you’re still young. Have your fun while you can. You know that’s why I never liked the fact that you and Eric got so hot and heavy when you were just twenty-two. You spent your best years with a man who didn’t deserve you.”

I nodded and pressed my lips into a tight smile. She was right, of course—as was everyone else with their I-told-you-so’s. I was the fool who had loved him blindly for too long, getting nothing in return. I had gotten my revenge on the cheating bastard, but it had kind of backfired in a way I hadn’t expected. Now, for the next eight months, I would have to call Scotland my home.

I heard footsteps coming from behind me, and I turned around.

The hill I had attempted to climb was deserted. I was alone. In that moment, it dawned on me that maybe this hadn’t been the smartest decision. I shouldn’t have ventured out by myself; I was in a foreign country, and I didn’t know anyone.

But the scenery had been so inviting.

I barely detected my mother saying, “What is it, honey?” I was too focused on the noise. A moment later, a tall guy in a baseball cap and athletic gear reached the small, flat spot where I had been chatting with my mom. He was wearing a windbreaker and shorts.

“Hello,” he said in a deep, uber-manly voice, one of those that could make you swoon even saying the most boring and generic stuff. He had me at hello.

His eyes shifted to the phone in my hand. My mother kept calling my name from her office in Los Angeles. The stranger stared at me for another second, and then he gave an imperceptible shake of his head. The corner of his lips curled into a smile.

Ugh. Fucking embarrassing. I had been caught FaceTiming with my mom. This would be a really good time to lose reception, but noooo. My mother kept calling out to me, but I was sort of frozen on the spot, staring at the handsome stranger.

Yes, handsome. I stared at him all of five seconds, but that was enough to see his face—and what a face it was. He had the most perfect features: straight nose, strong jaw, high cheekbones. His eyes were sharp blue and gorgeous, and with just one look, they were melting my insides.

“Mom, hang on a sec,” I said, completely distracted by the vision in front of me.

He quickly walked past me and kept climbing up the steep slope, making it look so effortless.

“What is it, honey?” my mother asked again.

“Nothing, Mom. Just some mountain climber,” I said in a lower tone, raising my eyebrows, hoping the stranger wouldn’t hear me. He kept moving just as steadily as he had a moment before. He had to be a pro—he moved way too quickly to be a regular person. I was a fan of hikes, but my expertise was limited to canyons in the valley. This California girl was no match for real mountains like the peaks of Scotland. I had been out of breath in minutes. It must have been the altitude or perhaps the fact that my body was not made for strenuous exercise, no matter how hard I tried. I might not have had a lot of time to look at the stranger, but since I got to stare at his back for a little bit, I knew the rest of his body was as good-looking as his face. He had broad shoulders and muscular, lean legs—no wonder he made it look so damn easy, effortless even. His thin shorts revealed the curve of his ass and that alone was…spectacular.

I sighed. It had been too long, what felt like forever since I’d lusted after a guy. I guess I wasn’t broken after all. Good to know. If I had more stamina and no shame, I would have followed him up the mountain. I would have committed to following that ass anywhere.

“Mom, I have to go. I need to get back to the townhouses. Maybe I can catch my roommate before my orientation.”

Hello! I’m the author of Prude, This Love and FU Cancer. I was born and raised in Italy but now I live in Oklahoma City with my husband and kids. I love traveling and I’m a self-proclaimed concert addict. If you have questions about me or my books, ask me on Facebook, Twitter and Instagram.

I had to say that Hilaria Alexander made one of dreams come true with Lost in Scotland, writing about this story about a makeup artist and the sexy hot scot who’s gonna steal her heart, in freaking Scotland, on a new TV series based on a fantasy saga.

Right up my alley! The blurb was definitely catching my attention and when I started to read it … No way I was going to put this book down!
I was afraid that my enthusiasm mood would fall flat but it wasn’t. I was already read to pack and move to that place. It could have been a typical movie star romance but it wasn’t. This story was told in a smart and refreshing way. When I was expected the hero, Hugh to be someone unattainable, I was totally taken aback. Damn I have a crush!
Hugh was living his passion, and being on a set of one of the most expected show put a lot of pressure. His goal was to play his part and focus on his career, until a sassy and witty woman came into his life. I really appreciated this character, Hugh was not the usual actor and it was so good. Down to earth, close to his family, passionate and kind. A man full of mystery and intriguing.

Sam was trying to get through a lot of things. After leaving her cheating boyfriend and some angry payback later, she finally found a way to breathe. What about a trip to Scotland for a fresh start? Feisty, witty, caring for her family and totally a badass. She had to move on and this job was the opportunity to be what she wanted to be, away from all the craziness.

Oh my these two … sparks will fly! The chemistry and banter were off the charts. The building tension and flirty banter was really great. The attraction was intense but it was so much more than that, definitely beyond the physical, the constant need and craving for each other. Just gave me goosebumps at times. 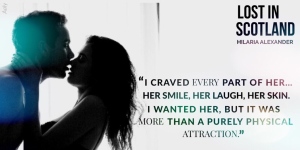 This story was a breath of fresh air, with magnificent scenery places, giving you the need to travel and to be part of this trip. Lost in Scotland was such a beautiful journey about finding yourself, full of romantic vibes, with a hot Scot and the woman who stole this heart. I laughed, I swooned and I almost cried but it was so worth it.