A sexy thriller about the animal in all of us.

Aidan uses his superpower to stabilize minds at the Hollyreed Specialist Hospital. Ulani uses hers to chase rats on rooftops. Until she’s caught and deposited in Aidan’s care.
At the hospital, Aidan finds Ulani’s room empty—save for a cat, whose fur retracts in favor of silky skin and a vamp-gorgeous femme fatale.
Aidan’s obsession with Ulani grows—
While patients at the hospital go missing. 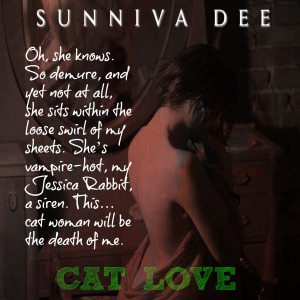 As we press down into the bowels of old Hollyreed Mental Hospital, I’m glad I brought flashlights. Like a good Boy Scout, I even brought my Swiss army knife, which boasts the customary array of miniature tools.

I’m not going to lie. The basement is eerie. It’s my version of Hell, the old-fashioned way, dank with humidity, scurrying animals—rats, I’m sure—and at one point I could have sworn I heard rattling chains. I chuckle, even as the hairs stand on end at the back of my neck.

“Ha. You’re so scared,” Ulani says, amusement the only feeling emitting from her. The beams of our flashlights illuminate the way up iron-cast stairs that make me think of boats. As I walk into a piece of cobweb, I let out a small, horrified grunt, confirming Ulani’s statement. Awesome.

Seconds later, a rodent darts in front of me, and I suck in a girly breath. “Not everyone’s used to chasing critters,” I say, causing her to giggle.

I fumble with the door handle at the top. It’s not giving.

“Here,” Ulani whispers low, maybe in order to not disturb the rats. Higher up on the door, there’s a bolt I don’t see until she slides it open—without even targeting it with her flashlight.

“You see in the dark?” I feel less and less super around this girl.

She shrugs. “Well, yeah—it’s not that dark.”

“Right, because it’s just pitch-black. I’d say your vision’s another gift from your cat family.” She nuh-huhs, and I don’t insist.

For the next fifteen minutes we walk in silence. Thankfully, they spent a lot of money on this hospital back in the day, which means the wide stairways are still sturdy, and the floors don’t give under our feet. I suspect a grand portion of the building is pure cement.

The whole place is silent. So silent there’s no creaking of old wood or rustling from tattered curtains in the windows.

“I know. Can’t believe I haven’t checked it out before. It is creepy here though, so I understand if you’d rather go back home.”

Ulani’s big on shrugging tonight and does it again while we take the stairs up to the third floor. “Nah. Maybe I’ll find a sweet little room to set up camp in if you become too much to handle.”

“Me hard to handle? That’s what I call projecting. And what’s wrong with your own apartment if you wanted to leave mine behind?” I add, sounding like we’re actually discussing her moving out. Which she’ll do over my dead body unless she learns how to control her inner cat.

“Meh, this place is cool. And you’re full of it,” she quips. “I speak on behalf of all women when I tell you that men are sexy but super-obnoxious. You included.”

We’re in a bit of a conundrum with Ulani’s erratic changes between cat and woman, but I still have to bite down on my lip to stifle the urge to chuckle.

“Ulani, listen to me. You delayed the change for fifteen minutes in there. Have you ever done that before?”

“Be patient. You’ll master it.”

“But I’ve meditated for a freaking month straight. If it worked that well for you, why isn’t it kicking in for me? And you were just a little kid too—it should be even easier for me.”

Ah, she’s sad. Frustrated. She turns her head to the side from her facedown position on the bed. Warm, wet cheeks and shiny, messy hair; her pull is even stronger now that she isn’t even trying. She’s so lovely.

I stare at her lips and lower my voice when I explain, “I think people are different. What works fast for one person might take longer for someone else. Who knows; me being a kid when I learned how to control my power might have made it more intuitive.”

Her breathing slows. Focusing on me, her gaze drifts over my face. Gleaming with freshly shed tears, the disappointment still lingers in her eyes, but they hold something else too.

If I followed my instincts, I’d ignite my feelers to read her. I won’t though. I need to see her like this. Just observe how she reacts to me.

Her shoulders. They curve above the sheets, ivory white and as beautiful as—all of her. I realize she never dressed after changing back from Mina. She just went to bed.

“Do you want your clothes?” I whisper.

She blinks slowly, eclipsing then displaying emerald green. Her mouth is so red. Tasty, I know.

“No…” She doesn’t invite me with words, but her lips part, showing me.

I sit down on the bed next to her. Cup her face and stroke her cheeks with my thumbs before I trail down to the start of her neck.

“You are such a handful.”

Originally from Norway, I moved to the United States twelve years ago. I hold a Master’s degree in languages and taught Spanish at college level before settling in at the Savannah College of Art and Design as an adviser.

I write New Adult fiction, sometimes with a paranormal twist—like in “Shattering Halos,” published by The Wild Rose Press in February 24th 2014 and in “Stargazer,” released November 2014. The first book I’ve self-published was the New Adult Contemporary novel “Pandora Wild Child,” which made me a proud indie author in October 28th 2014.

I specialize in impulsive heroines, bad-boys, and good-boys running amok. Then, there’s the intense love, physical and emotional attraction beyond reason—sensory overload for the reader as well as for the characters. Like in real life, I hope you’re unable to predict what comes next in my stories.

Yes, so I write what I love to read, and depending on the reader, you’ll find my books to be a fast-paced emotional rollercoaster—or disturbing because the struggles of love aren’t your thing. Here’s to hoping you have the same reading vice as me!