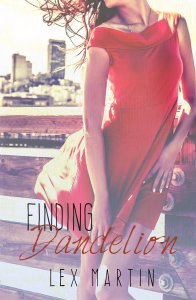 When soccer all-star Jax Avery collides with Dani Hart on his twenty-first birthday, their connection is instantaneous and explosive. For the first time in years, Jax isn’t interested in his usual hit-it and quit-it approach.

But Dani knows better. Allowing herself a night to be carefree and feel the intensity of their attraction won’t change anything when it comes to dealing with a player. So when Jax doesn’t recognize Dani the next time he sees her, it shouldn’t be a total shock. The fact that he’s her new roommate’s brother? That’s a shock.

Dani doesn’t regret that night with Jax, just the need to lie about it. Since her roommate has made it clear what she thinks about her brother’s “type” of girl, the last thing Dani wants is to admit what happened.

Jax knows he’s walking a fine line on the soccer team. One more misstep and he’s off the roster, his plans to go pro be damned. Except he can’t seem to care. About anything… except for the one girl who keeps invading his dreams.

Despite Jax’s fuzzy memory of his hot hookup with his sister’s friend, he can’t stay away from her, even if it means breaking his own rules. But there are bigger forces at work–realities that can end Dani’s college career and lies that can tear them apart.

** ARC kindly provided by the author for an honest review. **
Book two of the Dearest series, and it’s about Dani (Clementine’s roommate) and Jax (Clementine’s twin brother).
Two total opposites at first sight! Jax is the famous soccer player, with girls throwing at him (definitely a manwhore), complete asshole and Dani the opposite, a little bit shy, with a lack of confidence, but she’s a hard worker,talented artist, self confess pushover and a little bit lost.So when Dani decided to be reckless for once, with the help of her friends, leading her to have a very steamy moment with Jax! Totally hot!!! But when he didn’t recognize her and she saw him with an another girl, she didn’t want to tell him the truth. She feared that her adventure with Jax could interfere with her friendship with Clementine.

When they got reunited after a some circumstances, with Jax looking after her, it was like they knew each other, their banter was so natural.
I could totally feel the heat between these two and their chemistry was mind-blowing! She made him believe that he could let someone in, to trust women.

And when you thought that they would make things right and that everything’s gonna be alright, BAM !!! Everything was crushed!!!

If you read the first one and with some glimpses about Clementine and Jax’s mother, you could sense that her mother would definitely get in the way, with her manipulative skills and craziness!
So between all their issues and his family, things weren’t easy and it took a long moment to make Jax understand how much he was wrong and that Dani wasn’t the girl that her mother told him she was.

Actually, he had to go back to her mother’s, she was the most selfless and caring person. Always putting the ones she loved first. Dani and Jax were having so much issues; Jax was immature and Dani was not enough confident and always being afraid of what people will think about her relationship with Jax was a little bit annoying.

Hopefully, the end was really great and the author managed to put the story to another level, it was so much better. I can’t say that this one is my favorite, but it was a pretty good story, I loved seeing all these fantastic characters from book one (even that all the books could be read as a standalone).
Dani and Jax had great chemistry and I was happy that they had their HEA, but damn these two gave me whiplash! Special mention to Dani’s BFF Travis!!
So I gave 3.5 – 4 stars! 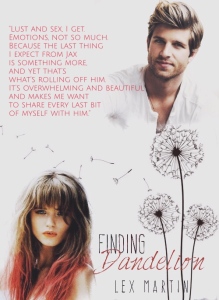 Lex Martin writes new adult novels, the sexy kind with lotsa angst, a whole lotta kissing, and the hot happily ever afters. When she’s not writing, she lives a parallel life as an English teacher. She loves printing black and white photos, listening to music on vinyl, and getting lost in a great book. Bitten by wanderlust, she’s lived all over the country but currently resides in the City of Angels with her husband and twin daughters.